Set in the near future, John Dixon’s novel, ‘The Point’, is about Scarlett Winter. She’s born into a military family but with no desire to follow in her retired father or brother Dan’s bootsteps as she’s very much the rebel. She doesn’t even attend her parents secret graduation party for her, already planning to backpack for a year. Thing is, she tries to sneak into the local Senator’s daughter’s party, realises she has to hide her stash of pot, spots some bombers planting a bomb and somehow diverts the blast. Although Scarlett flees, she has been spotted and finds herself facing jail or the military, West Point in fact. There, with a bunch of others who also don’t want to be in the military, she is told they are posthumans with extraordinary powers. 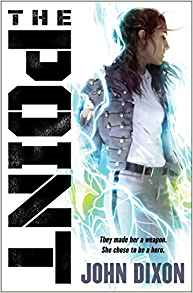 Scarlett’s actual ability is to absorb kinetic energy and then release it again although much torturous work is done to get it functioning under her control. The nearest comparison to the comicbook world is probably be the Marvel characters Sebastian Shaw for taking the absorbing the energy and Alex Summers aka Havok for its release.

Much of the story is centred on life at West Point until a rogue unit of posthumans, previously trained there, go on a terrorist spree, including killing Scarlett’s brother. Oddly, their leader, Jagger, has a talent equivalent to my own ‘Psi-Kicks’ Psionics characters of sharing abilities. Then again, when you’re dealing with super-human abilities these days, I’d be surprised if the same pot isn’t picked at from time to time.

To say much more about the plot from this point is definitely spoiler. In many respects, Dixon uses standard plot tropes of hidden romance, disruptive people and so forth. The real problem is that good side is as nasty as the villains for much of the book. Considering how powerful these posthumans are, you would think there would have been more rebellions than there were.

‘The Point’ is at least a reasonable read and, I presume, there will be a follow-up as to what kind of military service these people will finally get up to.