Trying to assess the merits of a comic book series from a single issue part-way through the storyline isn’t easy at the best of times and the complex world of ‘FBP’ doesn’t help. But the overall gist is this: randomly occurring ‘bubbleverses’ pop up in our world and, within these, the normal rules of physics do not apply.

Buildings can collapse while bullets will change direction, zigzagging unpredictably. Anyone trapped inside these bubbleverses can find themselves quickly coming to a sticky end. 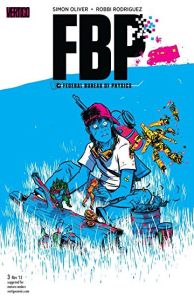 The protagonist appears to be a chap called Adam Hardy, an FBP agent. We learn in this issue through a series of sepia-toned flashback panels that he lost his father as a youngster. He’s unusual in being rather ordinary to look at, but smart enough to figure out the rules of the bubbleverses quickly enough to use them in his favour when carrying out his duties.

Issue 3 ends with Hardy seemingly trapped inside a bubbleverse, alongside an individual called Crest, who he was sent to extract. A B-plot reveals actions by other parties intent on deliberating collapsing the bubbleverses, though their reasons for wanting to do that remain obscure.

Overall, entertaining enough, but as a single issue, the story doesn’t really make a lot of sense. The artwork is workmanlike but the muddiness of the colour palette used, together with the relatively drab settings involved, mean there’s nothing mindblowingly attractive here. In terms of value, while there may be 32 pages, only 20 of them are the actual story; the rest are either adverts, or, in the case of three of those pages, features about other Vertigo titles.