It’s probably impossible to overstate the influence of Edgar Allan Poe on popular fiction. To pick two celebrated examples, the weird tales of H.P. Lovecraft and the ‘Sherlock Holmes’ stories of Arthur Conan Doyle have obvious precursors among the works of Poe and, if you follow these lines of descent through to the present day, it’s hard to find anything in modern detective fiction, dark fantasy or supernatural horror that doesn’t owe something to the old master. 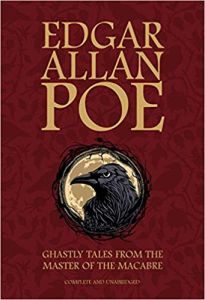 On the other hand, Poe is perhaps a bit less widely read today than he was in the past and where Lovecraft and Doyle remain among the front rank in terms of popularity. Perhaps Poe has become something of a connoisseur’s choice, familiar enough to those studying American literature, but less often read by those still at high school. That’s a pity, because Poe remains very modern in many ways and his shorter stories especially are highly accessible.

This new collection of 27 stories and poems brings together what’s essentially the best of Poe’s output, and like other collections from this publisher, does so at a very reasonable price. Indeed, for £14.99, this collection is pretty much a must-have for any fan of weird fiction, including all the essential and influential works, from his most famous poem, ‘The Raven’, through to his only published novel, ‘The Narrative Of Arthur Gordon Pym Of Nantucket’.

Of all Poe’s works, ‘The Masque Of The Red Death’ is one of the most familiar, thanks to its brevity, simplicity and delightfully modern take on the traditional morality play. As such, it’s routinely included in compilations of horror fiction aimed at young adults and has been adapted many times into films, comics, albums and even art installations. Most readers will sense the inevitability of the ending long before it happens and ‘The Masque Of The Red Death’ is really more of a beautifully structured tableau than anything else.

By contrast, ‘The Pit And The Pendulum’ is a much more challenging read, not because it is lengthy or verbose, but simply because Poe brilliantly increases the tension with each paragraph. Indeed, the story itself is anachronistic, placing the Spanish Inquisition alongside the Napoleonic Wars, while the torture methods used are as over-complicated as they are ghastly. But of course describing the reality of religious persecution was not Poe’s aim, but rather an exercise in psychological and physical terror, which Poe accomplishes masterfully.

While Poe frequently created imaginary or historical worlds for the purposes of unnerving his readers, he wasn’t beyond using contemporary situations if they suited his purpose. In ‘The Premature Burial’, he taps into one of the most famous Victorian Era anxieties. A lesser writer would simply have described the predicament of a person erroneously entombed, but Poe cleverly inverts that, by having the protagonist so afflicted with fear of being buried alive that he repeatedly slips into longer and longer periods of catalepsy.

Included in this collection are the three Auguste Dupin stories, ‘The Murders In The Rue Morgue’, ‘The Mystery Of Marie Roget, and ‘The Purloined Letter’. Widely recognised today as an early example of the sort of detective fiction that relied on analysing clues and then using them to deduce the course of events surrounding a crime. Arthur Conan Doyle implies as much when John Watson compares Holmes to the fictional Dupin, though Holmes himself is rather unimpressed by that, describing Dupin as ‘a very inferior fellow’. In fairness to Holmes, the Dupin stories have perhaps aged less well than Poe’s weird fiction. On the other hand, there are some interesting similarities to be drawn between Poe’s work and Doyle’s. ‘The Purloined Letter’ has a similar theme to ‘A Scandal In Bohemia’, while ‘The Murders In The Rue Morgue’ arguably invents the so-called ‘locked room mystery’ memory solved in such stories as ‘The Speckled Band’.

So many of the stories in this collection have become paragons of their type, such that it would be impossible to do them justice by discussing each of them here. Suffice it to say that ‘The Cask Of Amontillado’ remains one of the most famous revenge tales in English literature, not only inspiring many other writers, but having been adapted into films and comics many times. ‘The Gold-Bug’ is another famous short story, but one that includes both a substitution cipher and a clever mechanism that need to be mastered before the protagonist can recover the treasure.

‘The Fall Of The House Of Usher’ is perhaps the best known of Poe’s longer works and, as such, demonstrates his ability to develop characters every bit as elegantly as his mysteries and psychological horrors. Students of English literature continue to read and study this work closely because of its depth. Not only are the characters important in what they say and do, but the very surroundings play their parts, too, not least of all the fabric of the house itself. Generations of critics have picked out themes as diverse as drug abuse, prophecy, supernatural horror, mental health and, of course, the suggestion of incest between the two Usher siblings.

There are some poems here too, notably ‘The Raven’, the one poem of Poe’s that even casual fans of weird fiction will know about thanks in part to numerous adaptations, including a Vincent Price film of 1963. The gimmick, if you will, is the single word answer the raven returns to each of the questions posed by the narrator: ‘Nevermore!’ As the context of the questions asked changes, this reply transcends the vaguely comical into a mood of deep despair. While the location doesn’t actually change, the narrator finds himself in a sense trapped by the raven’s words, unable to return to the happiness he once enjoyed before the death of his lover, Lenore.