The basis of Ryan North’s book, ‘How To Invent Everything’ is transporting yourself into the past by a time machine but alas breaks down and you’re stuck there. No matter which century, this book is not so much a survival guide but the means to make where you are a better place and removing the centuries of inaccuracy that our current civilisation was built upon. He doesn’t make allowances for the time scale or whether the natives or animals won’t look at you for lunch to get all of this book instigated or help in the order you should do things.

Of course, this will also change the future although North also points out even when some of these discoveries were known, they were also ignored so presumably time will sort itself out no matter what you do. 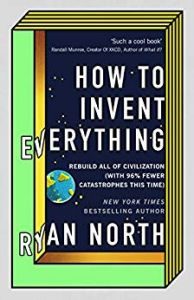 Having said that, the book does work well in terms of show the evolution of various things over the centuries so you get the original time scale, although not always why it took so long, principally caused by lack of initiative, stoicism or religion. Over the 17 chapters, North looks at everything from language to the sciences and farming and technology, with a look at music and even computers. You have charts for instant comprehension which makes it useful for comparisons.

That’s not to say there aren’t some good things in here. I like the reminder that the USA still hasn’t caught up with the rest of the world with the metric system. Even if they prefer some pre-metric measurements, that shouldn’t be an issue. After all, we in the UK have both measurement systems co-existing together and I suspect in the long term only metrics will be left. This isn’t likely to happen overnight. The American insistence on their measurements resulted in some recent Mars probes crashing because there was an assumption that there was shared measurements.

North’s means to test the food that you can eat in the past would be all well and good but it doesn’t support diabetics like me. It would make more sense to watch what the natives or animals are eating successfully as a guideline as to what to try. North makes a good point that the early vegetations looks nothing like how we have it today but it still takes time to in-breed to make the crops grow larger. The three field rotation, still needs tools to fallow the ground to plant seeds and that’s a lot of hard labour that the time traveller is going to find hard work.

The problem with North describing the plants and animals you need to pick to cultivate and tame is there are no illustrations or photos, let alone where they might be growing, which is going to make things somewhat difficult to distinguish them. After all, the earlier you go back, the more primitive looking plants and animals will look. These days, people have problems even knowing what farm animals look like. You also need the skill of a poacher if you want to catch a lot of these animals alive if you want to domesticate breeds and you do have to wonder how long North thinks you will live. Unfortunately, there is nothing on how to trap them.

There are some illustrations, especially showing how to use yokes on cattle and horses although I think lessons in creating and using a blacksmith’s equipment might have been handy first. Without that, ploughing large fields could become a big obstacle. Even if you aren’t or can’t plan to grow rice, there should be consideration for irrigation of the cultivated land. I can see a scenario where all the hard work is for nothing if you suddenly had a drought.

Don’t take it for granted that even some apparently normal things won’t take you off your stride. If you’re vegetarian or even vegan, will you stop eating bread knowing that there are live yeast spores in it as well as those cooked when making it? North also likes making alcoholic drinks, although I can find better uses for alcohol than drinking it, although it might befriend the locals.

In many respects, I wish North had prioritised the order to do things in, even if it would look like a modern day survival manual. Certainly, building a kiln would be one of the first things to be built as it can be used for so many things like pot-making and smelting ore for metals. Using it for cooking, less so. Smelting ore will give a variety of metals and if you’ve got cinnabar, then you’ll release mercury and you don’t want any of it or its oxides in your food, not unless you’re considering insanity as a way of life. Considering cinnabar comes up later under thermometers and how to smelt it, you would think this needs to be covered. North points out all the uses of glass but one important one, a convex lens is rather handy to start fires and saves a lot of time.

One of the worse things is having notes at the back of the book and bottom-notes on the pages than unite them all together in the main text. If you were trapped in the past, you wouldn’t want to be flicking across pages and cross-checking the bottom of the pages all the time. I think I would have rather had it all together. None of which is helped by North joking about the footnotes after a while as even he’s fed up doing them. When it came to showing machinery and putting the science laws in the italic footnotes demeans their importance.

North might be making the assumption that the time traveller is also a scientist but it would be easy to overlook some principles when you’re in a spot of trouble in getting things right. Some of the basic machinery, like pistons, needs a lathe to produce and there should have been some emphasis on how to make the tools to make other things.

North makes assumptions that you know what and where to find things like lye when making soap. This is covered in the appendix but really it would have made more sense to have how to make all these compounds in the chemistry chapter than split up. I was expecting more from the chapter on chemistry, although he does explain the different bonding the atoms go through to make compounds. Logistically, I would have preferred to have seen a bit more on making useful compounds by breaking down particular materials and recombining them.

The examination of sexually transmitted diseases, let alone toilet protocols will make you shudder. Although I see the benefits of making toilet paper than a bidet might have been a better option, I do think making books in an earlier period where the majority of people can’t read might be wasting time. I did come away thinking about the various supplies I would have filled my time machine with.

This book, as pointed out above, took a lot longer to read simply because of all the notes and footnotes. If North ever does a second edition, he really needs to consider combining all of the material together to make a cohesive whole than here. Saying that, there is still a lot of useful information here although I think I would also like a manual so I could at least attempt to repair the time machine. It isn’t as though I would need to know all the physics needed, just what parts I need to reproduce and how to find them.

An underlay of interest in alcoholic drink and certain foods does worry me more about North’s interest than the real need for survival. I can understand some level of brevity to keep some level of focus in what could otherwise be potentially dry text. Some of the information should only be carried out by adults and definitely not unsupervised children just in case you want to practice some of the techniques given here.

There is also still the matter of creating a time machine and there is no indication which decade or century that will be in. I doubt if it will be a small HG Wells device but more akin to something from Gallifrey. That being the case, you would certain stock up on some basic devices that you would need for any century you might be trapped in.