Every time I looked through publisher BearManor Media’s catalogue, I spotted the title ‘The Dr. Phibes Companion’ by Justin Humphreys and asked about its availability and got told not yet. That is, until last month and a jump of glee. The two ‘Dr. Phibes’ films starring Vincent Price are black humour horror of a seriously disfigured musician/engineer who is seeking revenge against the surgeons who failed to save his wife, Victoria, in the operating theatre. To do this, in ‘The Abominable Dr. Phibes’ (1971) he uses the ten plagues of Egypt from the Old Testament as his template.

For the sequel, ‘Dr. Phibes Rises Again’ (1972), is now seeking eternal life for Victoria and himself in Egypt and an immortal man who has a secret elixir. Of course, various people get in the way and have to be removed. Both films were amongst the earliest horror films I saw in the cinema and hadn’t seen any of Vincent Price’s early films at the time. Grisly but great viewing. 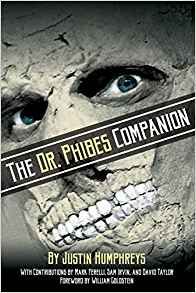 With this book, you get the history behind the films from the original 400 page script by James Whiton and William Goldstein, who were medical doctors, not done to standard format and how the basic idea was refined and polished other writers, including director Robert Fuest. I should point out that Fuest was a set designer on ITV’s 1960s ‘The Avengers’ before turning to directing and he didn’t hesitate in getting the likes of Brian Clemens and Albert Fennell involved or, indeed, various actors he directed for a couple days work.

If you ever wondered just what Phibes silent assistant, Vulnavia (actress Virginia North in the first film and due to her pregnancy replaced in the second film by Valli Kemp) actually was, you do get more than a few clues here. Personally, I would have preferred some ambiguity and there still is to some extent.

For those who are interested in tracking down the re-use of sets and props from these two films, you’ll have plenty to watch in other horror films from this time period as Humphreys guides you through a selection of British made horror films. The dry pool where Dr. Vesalius (actor Joseph Cotton) has to operate on his son was the real thing on the Elstree studio lot.

There is an examination of the attempts to make a third film in the series and why there wasn’t, although the original writers did do other books about the characters.

Following up from all of this, we get a serious look at the lives of director Robert Fuest, set designer Brian Eatwell and set photographer John Jay. Of them, Eatwell is the career to show some real interest in as amongst the other films he contributed to are ‘The Man Who Fell To Earth’, both ‘Three Musketeers films and ‘Walkabout’.

Both ‘Phibes’ films are stylised films that literally broke the mould for avoiding the cobwebby visions of other horror films up to that point. It was a shame that the producers removed much of the comedy to the sequel thinking the Americans wouldn’t get it and makes me wonder if the original footage is still hidden somewhere in a studio out there.

If you enjoyed the films then you will want this book. If you haven’t seen them, then do so first and then learn more. You can almost hear Vincent Price as Phibes giving his chuckle at the end. Now, where’s that rainbow. 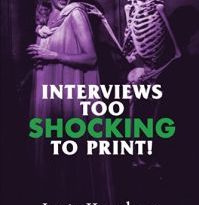 Interviews Too Shocking To Print by Justin Humphreys (book review).

Interviews Too Shocking To Print by Justin Humphreys (book review).