Don’t know what it says on-line but ‘Death Line’ shows a copyright date of 1972, so presumably it had a re-release in 1986. The US title is ‘Raw Meat’ in case you’re looking from the other side of the pond and need to avoid duplicating. After all, a cast featuring Donald Pleasence and Christopher Lee is sure to draw attention. If you love British films from the 1970s, expect to recognise a British cast of familiar faces. The original censor certificate shows it to be named ‘DeathLine’, no space as in the title nor a hyphen come to that. Just making all that clear in case this film is confused with other films with a similar name. 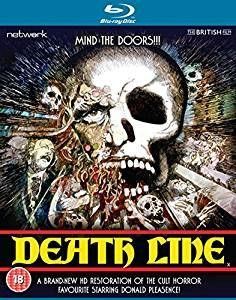 After all, the couple had come off the last tube of the evening so where did Manford go? Manford also has government and MI5 connections making him more than a person of interest. While Calhoun and Rogers are investigating Manfred’s flat, they meet Stratton-Villiers (actor Christopher Lee in a brief cameo) from MI5 who tells them the case is closed.

Patricia is pretty disgusted with her boyfriend’s behaviour and lack of interest in the missing Manfred and leaves him temporarily.

However, after some spoiler scenes that give away too much of the plot, another two bodies are found and one missing at the station and there is obviously someone (actor Hugh Armstrong) lurking underground. I’m still amazed that the couple still used Russell Square and, by an error of judgement on getting off the tube, Patricia is left alone at the station and is abducted herself. Campbell gets arrested himself for trying to get back into the station after getting off at the next station, returning to find the topside gates locked. He tries a second time when the station is open and finds the labyrinth of corridors.

Beyond that, there is too many spoilers but suffice to say you will jump a few times. There is a hint of cannibalism but back in 1972, this was only implied rather than bitten.

There’s a lot of dry wit in this film, especially from Donald Pleasence. The effects are pretty gruesome for its time. Chris Lee’s part is small for the current promotional selling point.

The main extra is a 15 minute interview with the late actor Hugh Armstrong who played the villain of the piece. We get some of his back history as a theatre actor before his memories of the film. The underground station was actually a real one and it was recorded in November so really cold. When the London Underground was built there was often cave-ins and people who died in them were just left where they were rather than dig them out as life was so cheap back in the Victorian era. I do wonder if people remembered that back In 1972, though.

The film trailer is a requisite, The 3 minutes of an Image Gallery shows an assortment of posters, film stills and other such goodies.

I can’t speak for the booklet as it doesn’t come with the advance copy but the theme music by Wil Malone is addictive to listen to and is a sort of dark-toned striptease music and you can have a listen on https://www.youtube.com/watch?v=VbEwfclNyhc