In the Marvel Cinematic Universe, the characters Ant Man and the Wasp have become something of a symbol of light relief. The epic and heavy events of ‘Avengers: Infinity War’ contrasting with the subsequent and relatively comedic and intimate Ant Man and the Wasp. This latest Marvel Platinum collection shows the insect-monikered duo in a slightly different light with each having a comicbook history swathed in melodrama and more than a little notoriety. 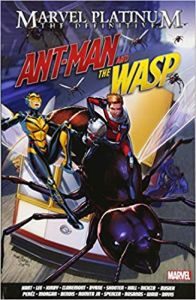 First up, originally published in 1963 is Tales To Astonish # 44, where the Wasp made her debut in a story written by Stan Lee and artwork by the Jack Kirby. Even for Stan Lee, a man whose creativity was sometimes matched by a tin ear for dialogue, this is a rather inauspicious debut for Janet Van Dyne aka the Wasp. Hank Pym is already fully established here as Ant-Man, with a brief flashback that establishes his marriage and the subsequent death of his wife at the hands of foreign agents.

In the present day, Dr. Vernon Van Dyne, working on similar miniaturisation technology to Pym’s, is found dead by his daughter who comes to Pym for help. Add in some aliens from the planet Kosmos, alongside her dead father, Van Dyne undergoes transformation into a crime-fighting partner for Ant-Man, whilst unsurprisingly falling in love with him. This is a densely-packed story that takes even comicbook credulity to the limit. It feels that half the comic is speech as exposition follows exposition and major events are dealt with over the course of a couple of pages.

Even by the standards of the time, it’s all a bit clunky with Van Dyne being less a heroine and more a simpering hanger-on. Kirby’s art is probably the saving grace here, with the bright primary colours and thick line creating the usual strident and striking effect that gives everything and constantly epic feel.

Moving swiftly on to 1977 and there are two issues of ‘Marvel Team-Up’ which sees Pym, now under his Yellowjacket persona, team up with the Wasp and Spider-Man to do battle with an enemy from Spider-Man’s past. Van Dyne, now Pym’s wife, has certainly moved on from her origins being a more confident and more equal character to her male counterparts, though writer Chris Claremont and artist John Byrne do include a few gratuitous shots of her in her nightgown. This is an all-action two-parter with plenty of verve. Both Yellowjacket and the Wasp are pretty anodyne here with all stoic quips and heroic poses. It’s their interaction with the more playful Spider-Man and the kinetic artwork from Byrne that keeps this bobbing along at a brisk and enjoyable pace. Its relative lightness also provides something of a contrast to the story that would come next.

Jim Shooter’s two issues of ‘Avengers: West Coast’ from 1981 that are showcased here are now somewhat infamous in comicbook history. In this tale, Pym is essentially a broken shell of a man, beset by paranoia and a self-doubt. The fact that his wife is a millionaire does nothing to improve his self-esteem and returning to The Avengers, which he helped found under his Ant-Man guise, shows Pym a bitter and angry man. The premise itself has a certain amount of intrigue, especially when you consider that it was made in the era before ‘comicbook heroes went dark’. Having a man beset by doubts and consumed by jealousy, whilst ostensibly a hero, provides a different kind of drama from the era’s norm. But it heads back into more normal territory when, after a contrived set of circumstances, Pym finds himself court-martialled by the Avengers and unleashes a killer robot so that he can be seen to save the day.

This contains the notorious panel in which Pym wallops Van Dyne in a fit of rage, something that Shooter claims was meant to be shown as an accident, but the artist got it wrong. It tarred Pym with a ‘wife-beater’ brush which made it hard for the character to recover. It doesn’t help that in this story Van Dyne has regressed back into ‘simpering’ and ‘melodramatic’ mode, with the opening seeing her beg her husband to pick a dress for her to wear. She never feels much more than a prop in the story, hence why the beating feels so distasteful. It feels a lazy plot device used with a character who isn’t given much comeback, even if she ostensibly ‘saves’ the day by the end. There are some interesting things to take out of this story but its flaws are apparent in the cold light of the modern era.

Three issues of ‘Avengers: West Coast’ from 1990 see Pym redeeming himself as a hero and the Wasp coming back from the rather less ‘enlightened’ portrayals of the past. With the Scarlet Witch turning her back on her Avengers friends and re-uniting with her father, Magneto, the odds seem stacked against the good guys. Enter Pym and others to try and turn the tide. There’s a certain touch of Jack Kirby about proceedings with epic stakes of mutant and humankind all established and Magneto’s satellite headquarters add an extra element of other worldliness to everything. The third story in the set is ostensibly a one-shot with a fine line in action that adds a good dose of ecological subtext with the villain Vibro trying to save the Earth from itself.

The rehabilitation of Pym is completed with a 1999 story with the Avengers and Pym taking on Ultron. This is perhaps a typical late 90s piece of work, all busy and scratchy artwork from George Perez that is kinetic and filled with action and seemingly unbeatable odds for the heroes. It’s slightly shorn of context, without previous months of storyline to refer to but, with the story featuring Pym making amends for the sins of his past, it makes sense to add it to the collection. The same goes for a one-shot which explains how Pym was abducted by the Skrulls, an important plot point for a major storyline of the mid-2000s.

Marvel Cinematic Universe fans will breathe a sigh of relief as Scott Lang makes an appearance under the Ant Man moniker. After all the epic melodrama of the previous stories, Lang, like his filmic counterpart. is a lot more low-key as a character. Here he tries to set up and run a security company whilst trying to keep up the relationship with his young daughter. But it wouldn’t be a comicbook if he wasn’t drawn back into being a hero after the son of a former enemy of his decides to get a strange form of revenge.

Lang is a likable presence here, a wisecracking hero-by-default while the story undercuts some of the more ridiculous excesses of comicbook characters. After the heady and world-shattering events of previous tales, this comes across as something of a palate cleanser and is one of the most entertaining stories in the collection and a bonus point for the wonderful cover that apes ‘Miami Vice’.

The final story is a one-shot devoted to the Wasp, released on Comic Book Day 2016 as part of the Civil War II event. But this one isn’t Janet Van Dyne but she’s someone with a very close connection to Hank Pym. It’s a relatively bright and breezy story with certain elements of darkness and ushers in a new era for the character.

This is a sometimes frustrating collection. Whilst the Wasp would go on to become an important part of the Marvel Universe, her early outings were often maddeningly sexist with the character given little to do except fall in love and pine after her man. The later outings were up and down with her portrayal and it’s hard to find a ‘through line’ within this collection. But while the stories are sometimes flawed there are some great moments of entertainment to be had here.