Marvel and ‘Star Wars’ have always had a strong relationship. In 1977, a comicbook adaptation was based on ‘A New Hope’ and swiftly followed by a monthly title that continued the adventures of Luke Skywalker and friends. Massively successful, ‘Star Wars’ continued at Marvel until 1986.

A popular run for the title followed by the likes of Dark House and IDW in intervening years but, after Disney acquired both Marvel in 2009 and Lucasfilm 2015, it seemed natural that the comics would return to the Marvel fold.

As of writing, the Marvel stable of titles includes ‘Poe Dameron’, ‘Doctor Aphra’ and ‘Darth Vader: Dark Lord Of The Sith’. With ‘Star Wars’ hitting its 40th anniversary last year, Marvel decided that one of the most appropriate ways to celebrate both the franchise and their long relationship with it was to retell the story of ‘A New Hope’ in variant covers across its titles. This book collects all 48 covers with a few bonuses thrown in here and there. 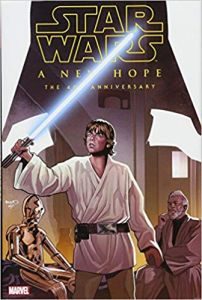 With one page showing the cover and the other giving a précis of the ‘Star Wars’ storyline, though the audience this book is aimed at hardly need it, and some development sketches or, on occasion, pages from the original Marvel adaptation of ,Star Wars,, the layout of this collection is exceedingly simple. Gathering the covers in the same chronological order as the film, we see the story envelop in front of us in a series of tableaux.

The first thing that is immediately noticeable is how well ‘Star Wars: A New Hope’ works in purely visual terms. No dialogue is needed and none is used, apart from Kevin Nowlan’s piece containing the immortal line, ‘These aren’t the Droids you’re looking for’ and we just need to see the ‘beats’ to let the film play out. Michael Walsh shows a gaggle of Jawas taking R2D2 away for scrap.

Luke and Obi-Wan watch as blue hologram imparts a message of great import. Adi Granov shows Darth Vader and Obi Wan engage in a lightsaber battle for the ages. It shows how much of the film can be broken down into moments that can be considered iconic with the realms of both cinema and culture.

Of course, the fun here is also seeing the different approaches to the material. The always brilliant Chip Zdarsky, one of the people behind the equally brilliant ‘Sex Criminals’, gives off a cartoony vibe as Jabba and Han Solo confront each other at Mos Eisley. The artist known as Rahzzah opts for a more photo realistic option with Leia, C3PO and General Dodonna pondering over the plans of the Death Star. All the artists concerned seem to have a real love of ‘Star Wars’ and all have been allowed to interpret it in their own unique way.

The book also contains a revealing interview with Jordan D. White, Marvel’s ‘Star Wars’ editor talking to writers Jason Aaron and Kieron Gillen. In addition, a number of artists talk about their approach to the variant cover scheme. A collection of other covers from ‘Star Wars’ titles are also provided, including Tula Lotay’s clever and insouciant rendering of Han Solo and Mike Mayhew’s particularly fine ensemble cover which would work perfectly as a poster for the entire franchise.

Rounding out with a reprint of the original 1977 Star Wars # 1, this is a pretty special collection and is a ‘comicbook-sized’ coffee table book that all ‘Star Wars’ fans should find a place in their shelf for.