‘Broken Branches’ by Ben Ellis is the second self-published book from this author who lives in Worthing. Now Worthing is important as both ‘Broken Branches’ and his first book, ‘In A Right State’ (https://www.sfcrowsnest.info/in-a-right-state-by-ben-ellis-book-review/) are set in the fictional south coast town of Wigthorn. This is, of course, an anagram of Worthing and there’s lots of little things like that buried in this rather stark tale from Ellis. 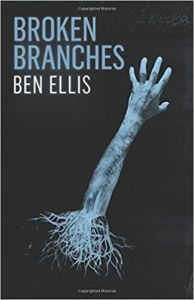 The story is set in the near future where all men in Britain are sterile. Fertility drugs are given only to couples whose genetic matches are approved by the state. Those without a family history to prove their genetic heritage as part of the National Family Tree are known as Broken Branches. They are not so much outcasts as a lower cast of people. They are not allowed to breed in a measure to help preserve the genetic purity of the National Family Tree.

At the start of the story, Grace Webb and her husband Tom are trying to make their way to the building housing the Department of Family. While Tom is a Thoroughbred, someone proven to be part of the National Family Tree, Grace is a Broken Branch and they need to apply for parenthood rights. By convention, Thoroughbreds are not meant to mix either socially or genetically with Broken Branches.

Just to hammer home the point and, coincidentally, make the Webb’s visit a little more traumatic than it need be, a terrorist group called The Gardeners are protesting outside of the Department of Family. They believe in more radical action to weed out dead branches and prune the National Family Tree of rotten fruit. Something they demonstrate to the crowd of cheering onlookers with an unfortunate captured Broken Branch and a pair of gardening sheers. The Gardeners will come back to haunt the Webbs in the Future.

Surprisingly, the Webbs are successful in their application and are allowed to conceive a child. Now this could have been a short happy ending but for the accidental actions of Grace’s twin brother, Charlie. He not only manages to get Tom fired from his rather cushy job, but he also manages to impregnate the Thoroughbred Ann Rock after a one-night stand. Ann is quickly dumped by her family who want to do their bit to protect the National Family Tree.

It’s at this point that Grace and Tom, along with Charlie and Ann, come to the attention of the Government, The Gardeners and a rogue scientist for varying, different reasons. For the Government, the expectant mums’ babies have real potential which must be secured. The Gardeners, on the other hand, are violently opposed to any new Broken Branches being born and will take extreme measures to prevent it. I’m not going to give out any more of the plot as it would introduce to many spoilers.

There are lots of things I like about this book. The setting in Wigthorn is plausible, as is the national obsession with genetics and the purity of the gene pool. Whenever you get a polarised society you are almost guaranteed to get extremist groups. The Gardeners are there for the Thoroughbreds from the start, but the Broken Branches action group are rather late to the party.

In Ben Ellis’ first novel, ‘In A Right State’, I thought the light-hearted almost tongue-in-cheek style of writing didn’t do justice to the story. This has changed as ‘Broken Branches’ is a serious book with a serious writing style. There’s some swearing and violence. although it’s not in the main a violent story. The main characters have more depth and the environment is plausible, if a little terrifying. The pace of the story is good. too.

Where I think the book is lacking is that it’s too short. Some areas and characters could have been developed a little more and the ending is too sudden. It leaves some unanswered questions and I suppose the possibility of a follow-on novel. Personally, I do hope there is another book but even if there isn’t, ‘Broken Branches’ is well worth reading. It’s an improvement on his first book which was impressive for a debut novel.

Before I end this review, I should mention that each chapter has a ‘p’ and a ‘q’ section. So, you get Chapter 1p and Chapter 1q. The ‘p’ bit is the main story while the ‘q’ bit is the narrative of a rogue computer programmer being held captive in an island prison. These narrative bits tend to be no longer than one or two pages but provide a fascinating intertwined subplot to the ‘p’ chapters. Why ‘p’ and ‘q’ are explained in an extras bit titled ‘DVD Extras’ which appears after the main story. This section also contains some fascinating stuff on how he chose the characters names and other interesting bits and pieces. Bringing up the rear, so to speak, is the first chapter of Ellis’ first book. ‘In A Right State’.

I shall end this review pretty much as I ended the review for his first book, ‘Broken Branches’ was a very enjoyable read and I’ll keep a look out for yet more work from Ben Ellis. 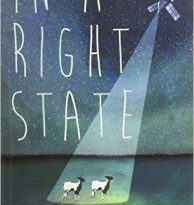 In A Right State by Ben Ellis (book review).

In A Right State by Ben Ellis (book review).