This is the first book from Ben Ellis so it’s his debut novel which surprised me as its quite impressive in some respects. It is set in a small town in the south of a future Briton where both local and national government has outsourced just about everything to corporations. The corporations aren’t doing it out of the goodness of their hearts, they are doing it to make some money. Quite frankly the more money the better, so it’s not long before they, the corporations, find ways to monetarise ordinary people and the data they produce. The story starts with Duncan Hartley attending an auction but it’s not just any auction. At this auction, they are going to sell off his newly deceased wife’s body parts. Such auctions are now the norm following the country’s endeavour to become carbon neutral. Paying for a burial plot or carbon offsetting for a cremation could cost a small fortune, while auctioning bits off for medical research helped pay the bills.

Duncan is attending for two reasons. Firstly, to say a final goodbye and secondly, to see what happens to her digestive system. There may be a clue to a crime Duncan has been committing for years hidden in what remains of her digestive system. Duncan may appear to be an upstanding member of the community but in a secret underground lair he has been growing fruit. Natural, non-genetically modified fruit which he and his wife have been eating in contravention to the prevailing laws. I should mention here that the style of writing is very sort of tongue-in-cheek. There are some wonderful comical exchanges between Duncan and a bidder at the auction who, at one point, tells him that there’s more bits of his wife he’d like to get his hands on.

Pharmara are the corporation who buy up the digestive system and quickly notice presence of tomato DNA that they don’t own the rights to. What follows is a chase as Duncan attempts to smuggle out the seeds of his produce to another country hotly pursued by Pharmara security. Duncan along with the very recent ex-Pharmara employee, Amy, are aided by the mysterious Colonel who has his own agenda. Unfortunately for our heroes, the Colonel’s involvement triggers another corporation, Rooftech, to also join the pursuit with their own security people. The future Briton in which the action unfolds is completely dominated by the large companies. Citizens have no privacy and face a relentless sales campaign encouraging them to spend more. Information on their buying habits, medical history and just about everything else they do is for sale. Foreign governments are also hiring the corporations to perform various trials on the local British population before they decide to implement the policies at home. People like me who are blighted with marketing calls despite signing up to the TPS (Telephone Preference Scheme) know just how ineffective the government chooses to be in controlling invasive marketing.

There is a lot in this story that is dangerously plausible although I am not sure the tongue-in-cheek writing style fitted it well. For example, some people are killed but is seems out of place in the light-hearted style of writing. Without giving away any details, the final chapter is particularly chilling especially when you consider just how plausible it is. While I have my doubts about the writing style, I do think Ben Ellis has real potential here. Certainly the characters need to be given a bit more depth. It was also a bit odd that none of the characters being pursued ever appeared to be frightened. Having said that, it was an enjoyable read and I’ll keep a look out for more work from the author. 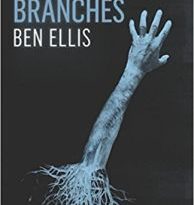