Writer-director Nicholas McCarthy’s ‘At The Devil’s Door’ is a fright vehicle that dutifully tingles from time to time but somehow still feels strained in its creepy convictions. McCarthy, whose 2012 low-budget horror gem ‘The Pact’ demonstrated a surprisingly taut scare showcase with armed potential, delivers a dread-ridden drama that curiously does not seem to pack a psychological punch as much as it desires.  Sure, ‘At The Devil’s Door’ has its share of twitchy bumps and knocks but it is not enough to overcome the mediocre doomsday devices that drive this atmospheric boofest. One can give some decent credit to McCarthy for shading ‘At The Devil’s Door’ with convincing eerie special effects, haunting music, tense anticipation and a sense of old-fashioned presentation that doctors the flick with dreary realism. Stylistically, ‘At The Devil’s Door’ does recall the mysterious nostalgia of old-time horror high jinks that reigned supreme in the genre of yesteryear. Still, McCarthy’s knee-knocking narrative creatively feels stagnant despite the promising ambition it craves to promote the edgy shock value.

Realtor Leigh (Catalina Sandino Moreno from ‘Maria Full Of Grace’) is a beautiful yet isolated woman looking to do her business in selling a house with a questionable reputation to her clients. In the process of preparing the tour of the house, Leigh happens to come across an odd young girl dressed in a red raincoat. Conveniently, the soon-to-be former owners of the house maintain the suspicion that this particular red-coated girl may in fact be their long lost runaway daughter who is trying to resurface. This causes Leigh to delve into the curiosity behind this mysterious girl and offer her assistance to reunite the youngster with the sellers. Of course, the main concern is whether or not the girl IS indeed the missing daughter of her clients.

Interestingly, matters become complicated when Leigh’s calculating painter sister Vera (Naya Rivera), an up-and-coming success story in her chosen artistic field, decides to stick her nose into the thick of things that would turn the events even more topsy-turvy.

Before the attention of the red-coated gal grabbed Leigh’s radar not to mention the potential parents we are shown the incident of a teen girl (Ashley Rickards) being coerced into ‘selling her soul’ for a load of cash on a dare by her boyfriend. The transaction seems quite involved but the girl willingly goes through the process as a means to bury herself in financial security. Somehow, the question becomes crystal clear: just what is the connection between the house and the young lady that seems to revolve around the inquiring sensibilities of siblings Leigh and Vera? Is it the perverse pay-off of the stash left in the house that prompts the presence of this strange girl or is there other supernatural unfinished business to consider that goes beyond the identity of this youthful feminine force arriving on the scene? Despite some reservations ‘At The Devil’s Door’ is a soulful revelation for McCarthy’s second feature length scarefest. There are encouraging signs of intrigue and titillating impishness that peppered McCarthy’s aforementioned ‘The Pact’ that made for solid psychological tension. As a filmmaker, McCarthy certainly knows the essence of a horror showcase and demonstrates a boundless range of fear and frolic with subtle references to an array of past chillers (notice the usage of ‘Psycho’ monikers ‘Leigh’ and ‘Vera’ for instance?). One can applaud the fact that McCarthy is an ardent student of the substantive horror flick mythology. ‘At The Devil’s Door’ resourcefully provides homage to its crafty observations of possessed souls and deviant dwellings. However, the provocative proceedings in the third act morph into the conventional mode of familiar moodiness and whispering smoking mirrors.

Overall, ‘At The Devil’s Door’ delivers the gory goods if one can resign to overlooking the spotty insertions that play into the occasions lapses of the dripping drama. McCarthy is a capable director that could probably generate an innovative spin on future spooky spectacles. Even with a mixed reception to ‘Door’, the filmmaking future looks bright into the telling dark heart of McCarthy’s grimacing imagination. 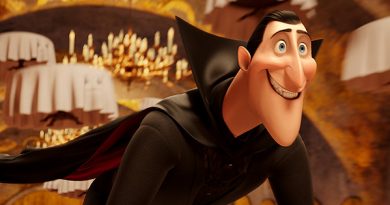