The vastly underrated ‘The Sacrament’ dares to bring a chilly psychological spin on the disenfranchised in society that have willingly checked out of a nightmarish existence only to gravitate to an unassuming paradise with a hidden horrific reality that awaits. Filmmaker Ti West’s horror gem ‘The Sacrament’ is chilling and an astute commentary on the fragile human condition looking for an immediate remedy on inflicted societal stresses. It is rare that a horror and/or psychological thriller is executed competently with solid acting, genuine slow burn thrills and suspense and a lingering consciousness that goes far beyond the slaughtered scenes. This low-budget bungle-in-the-jungle chiller has a lot of smarts and perception about its organic fear-inducing impulses than most of its creepy contemporaries with a higher profile.

Many folks may recognise ‘The Sacrament’s premise as the familiar blueprint for the real-life newsworthy tragedy that was the Jonestown massacre in Guyuana taking place in late 1978. The Rev. Jim Jones was the hypnotic leader of the Peoples Temple at Jonestown where he oversaw the welfare of the hoards of individuals that felt like neglected outcasts in their everyday lives. They followed and believed in the religious philosophies of the charming yet twisted Jones and his overzealous take on the ideal spiritual life that would supposedly heal the persistent inner conflict of his disillusioned flock. Jones’s madness in power and paranoia would manifest into the ultimate mass suicide that would shine a major spotlight into shady-minded religious cults and the brainwashing of the vulnerable masses feeling exposed to opportunistic, dangerous crackpots well-versed in manipulation and delusion. Well, ‘The Sacrament’s answer to Jonestown and the Rev. Jim Jones’s chaotic reign is Eden Parish’s commune leader ‘Father’ (Gene Jones). There will be more on Father to report on later.

As ‘The Sacrament’s advertisement boasts: ‘In 2013, reporters from Vice Media travelled to a secret religious community known as “Eden Prairie”.’  Thus, this is the foundation for the film when reporter Sam (AJ Bowen) and trusty cameraman Jake (Joe Swanberg) decide to go along with fashion photographer Patrick (Kentucker Audley) on a long distance trip to visit Patrick’s recovering drug addict sister Caroline (Amy Seimetz) at the Eden Parish commune outside of the country to an unnamed tropical ‘utopia’. Sam’s story and investigation on the goings-on at Eden Prairie would make for a great expose for Vice Media as this destination touts its ‘wellness agenda’ for those lost people that have left their burdened mainstream existences in favor of the relaxed and positive vibes at Eden Parish where there is no judgment or alienation in the pressures of poverty, racism, government interference or any other corruptible forces that has plagued mankind.

Upon arrival, Sam, Patrick and Jake are met at the airplane landing smack in the middle of a green wooded haven with no nonsense armed guards as they appear rather cautious and menacing. Immediately, the gunmen instruct the visitors to turn off their camera equipment en route to the main rocky path via truck that leads into the Eden Prairie commune. There, Caroline would greet her brother, Patrick, and his associates as they plan to check out the compound and interview its residents to learn more about this so-called jungle-based ‘promised paradise’ and the wonders it has done for the troubled Caroline and the other occupants.

After Caroline shows the guys around the facility, she slips away with Patrick as both Sam and Jake are left to conduct their tour and mingle with the locals to discuss what life is like at Eden Prairie. Sam does make his way around as he selects a few personalities to question them about how they feel about their lives in this current living arrangement of theirs. So far, the response has been overwhelmingly positive with praised feedback from a couple of former inner city black youths, an elderly black woman (Shirley Jones Byrd) and a twenty-something Australian woman. Even the commune’s head nurse and care provider Wendy (Donna Biscoe) chimes in on the love fest concerning the calming atmosphere at Eden Prairie. Sam has his reservations about the place but he cannot deny the happiness that Eden Prairie brings to its people so who is he to judge one way or the other?

What caused Sam’s curiosity during his interviewing around the camp was the constant mentioning of Eden Prairie’s head honcho known as the beloved Father. Sam had inquired about Father to Caroline and wanted to see if he was willing to sit down for a private interview with him. Caroline, being one of Father’s trusty aides, had made the arrangements for Sam and Jake to meet with her ‘boss’. The stipulation, however, is that Sam must conduct the evening interview session in front of Father’s flock of admirers. When Sam agrees to these terms and later on experiences the jubilant cheers and rousing respect that the people have for Father as he is treated as a rock star upon entering the crowd he is somewhat mystified by what he witnessed. The interview starts off breezy and innocuous with Father until Sam starts to ask some touchy questions that apparently makes Eden Prairie’s cherished leader defensive to the point that he hurls a disguised threat at the reporter regarding his wife and unborn child. This set off some really waving red flags in both Sam’s and Jake’s mind.

Things start to gradually add up when Sam and Jake are tipped off by a worried mother and her mute young daughter (Talia Dobbins) about how terrible Eden Prairie really is in actuality and that Father is not the loving leader as he appears to be to the public. In fact, he is a merciless mastermind that is keeping many folks captive, at least the ones that are not under his deceptive spell. The desperate mother pleads for Sam to return her daughter to the United States away from harm’s way of the sinister Father and his gun-toting minions. Soon, many of the Eden Prairie faces are begging for Sam and Jake to whisk them away from Father’s tight grip but they are not in a position to do anything to rescue these panicky lost souls.

The intrusion of Sam and his buddies, at least according to the rambling insanity of Father, is to be blamed for the mass destruction that soon gets out of hand as the hysteria grows on the day the trio returns home. The consequences become dim and damaging for Sam and company not to mention the countless people that are sacrificed to perish amid the ghastly decision for Father calling the shots for his followers to join him ‘on the other side’ of an idyllic kingdom where outside intruders cannot interfere with their way of peaceful existence. Let the grim games begin!

As writer-director, West instills a shocking injection into ‘The Sacrament’ that resonates convincingly in subtle fashion. Sure, the audience is geared to expecting the inevitable havoc but one cannot feel indifferent for the doomed protagonists of Eden Prairie whose sense of numbness is relieved by a treacherous, misguided madman at the helm. As Father, Jones is thoroughly captivating in an unconventional breakout performance that is Oscar-worthy as a diluted sociopath who is as vacantly scary as any movie monster you have ever seen in gross-out frightfests. No doubt ‘The Sacrament’ will get lost in the shuffle among the flashier and grotesque horror showcases out there. Nevertheless, the low-key ‘The Sacrament’ is a reminder that scream-dream cinema can be desirable, absorbing and imaginative in between the mindless (and in some cases meaningful) mayhem. 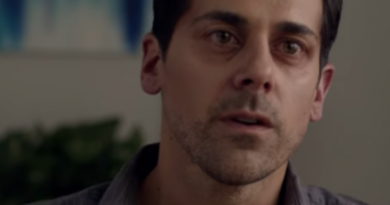