I always like it when editor Roy Thomas brings up a few surprises and the latest issue of ‘Alter Ego’ is that. The focus is on ‘Wonder Woman’. In the editorial, he points out the absence of the artist Harry ‘H.G.’ Peter from the credits in the latest ‘Wonder Woman’ film. Easily understood as he drew ALL the original series material under her creator William Marston, you do have to wonder at this slip-up. The reaches of SFCrowsnest are even bigger than ‘Alter Ego’, so anyone with the right connections here please pass the word up the line so something can be done for the next ‘Wonder Woman’ film. 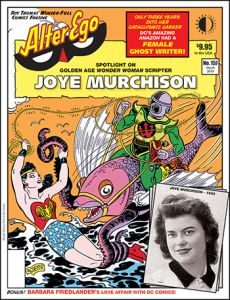 The same should also apply to writer Joyn Murchinson Kelly, the uncredited writer of 88 issues of ‘Wonder Woman’ for the same period and who is interviewed here. Spread over 30 pages with samples of the work she wrote together with the work of her penciller/inker H.G. Peter and when Marston became ill making this a must-buy of the issue to discover more about her contribution. Not only do we get insights into her working with Marston but also the work practices of its day. Even more remarkable is finding out the lady wasn’t so eager to become famous but over-joyed (sic) that her work is now kept in the Smithsonian Museum.

Now here’s an interview with a difference, a look at Barbara Friedlander’s career as associate editor/writer on the romance comics at DC Comics in the 1960s. Although its orientation was to a female audience, she provides a look at something we males wouldn’t normally have looked at. Come to that, I can’t ever recall girls buying them when they were available in the UK. Even so, it’s insightful on how male-dominated the DC bullpen was and why the likes of John Romita and Gene Colan moved to Marvel for more artistic freedom.

Lest you think that is all in this issue, we see more of the late John Broom’s self-reflections and his interest in cats. In ‘Mr. Monster’s Comic Crypt’, Michael T. Gilbert shows off Bruce McCorkindale’s reinterpretation of old comicbook covers with an interior based picture. This is less odd than it seems as Stan Lee did this after Steve Ditko left Marvel. It does make an interesting indictment for the strength of Ditko’s art that it could be transposed to the cover.

Going back to 1963, Nick Caputo reveals four fan opinions in the fanzine ‘Hero’ about the nascent Marvel Comics. It’s interesting to compare their opinions on Kirby, Ditko and Heck as well as on the super-heroes themselves. It does seem the only FF member they failed to pass comment on is Reed Richards himself. Incidentally, there is a part page of Hero # 2 shown and if you ever wondered where the term ‘purple prose’ came from, then it’s really a reference to the colour the printing process used at the time.

Memoriams this time are for once Marvel publisher Jim Galton (1924-2017), writer Harlen Ellison (1934-2018) and editor/writer Herb Rogoff (1927-2018). However, there is a much bigger piece on Tom Wolfe (1930-2018). I remember his first comicbook appearance in Doctor Strange # 180 but more so with Clea’s discovery and liking of snow but missed out on his appearance in Incredible Hulk # 142. As Roy Thomas points out, Wolfe was initially a famous journalist with an interest in comics before becoming a major author with the likes of ‘The Right Stuff’ (1979) and ‘The Bonfire Of The Vanities’ (1987) in case you can’t pin-point him. We see cameos of celebrities in comicbooks in the early days and this was one of the important ones.

Finally, a look at editor/writer Henry Aveline ‘Lynn’ Perkins of British extraction (I qualify that as he was born in Brazil of British parents and educated in the UK) who worked for Quality Comics in 1943. Perkins was typically reserved and reading here, it does seem a shame that he was teased at work for it.

As you might tell from my enthusiasm here, this ‘Back Issue’ is especially important and reveals a lot about the comicbook history. It also makes me wonder how many other ghost writers we might not know about. 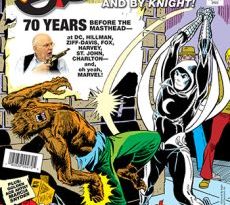 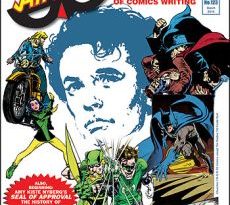 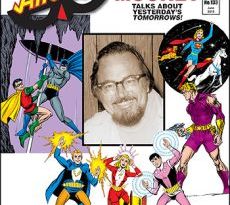