‘Trish Trash: Rollergirl Of Mars Omnibus’ is a graphic novel by Jessica Abel with background and design by Lydia Roberts and colours by Walter. I’m not sure what background and design mean. Originally released in three parts, the story is here collected into one big lovely edition with full colour printed on shiny paper. 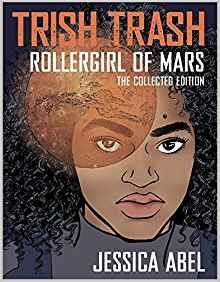 Anyway, Patricia Nupindju or Trish is a young lady who works on the family moisture farm in Candor Chasma, Mars, but has ambitions to be a Hoverderby pro. The local team, the Novas, are having tryouts for new players so she bunks off school to go, even though one is supposed to be nine years old to qualify for tryouts and she is only seven and a half.

There is an asterisk in the word balloon where Trish mentions her age and a useful footnote at the bottom of the page. It tells you that seven and a half on Mars is equal to fifteen Earth years because the Mars year is twice as long. Someone mentions ‘Novembris’ and a footnote informs the reader that Novembris comes after November and Decembris after December because months are doubled on Mars to account for the long year. Later, another note says that a T.L.A. is a Temporary Labour Assignment, a compulsory work contract assigned to Martys who reach a certain level of debt. They are all in debt.

Hoverderby seems a lot like ‘Rollerball’ from the classic 1975 film with James Caan. The professional players have stage names like Hanna Barbarian, Captain Fly and Betty Demonica. They are all young women and presumably have more money and status than moisture farmers. Although Trish fails to make the team, the coach is impressed enough to take her on as a Skategirl because with her knack for repairs she can fix the skates which often become clogged with dust during a match. She signs an indenture contract and has to work long hours. Her struggling aunt and uncle need her help on the farm and are not impressed. Trish’s parents disappeared in the Outback a few months earlier.

The science is realistic. Mars is depicted as dusty, bleak and red. There are no roads and the few vehicles hover. When outside, the people wear radsuits to protect them from the environment. The colonists have a hard life and are indentured servants to the Arex Corporation that financed the settlement. This is very similar to Robert Heinlein’s many tales of colonisation such as ‘Logic Of Empire’ and ‘The Moon Is A Harsh Mistress’ which often ended in rebellion against the mother planet. Also, water is a precious resource and when Trish rescues a dying native and shares water, the Martian is grateful. There’s another resemblance to Heinlein in the info dump, something he tended to do in his early short stories. Here the info dump comes in an appendix at the end of the book with informative essays explaining the rules and history of Hoverderby, how radsuits work, Native Martians and the homestead debate that set the terms for Martian colonisation. Cleverly, these articles are attributed to wiki.marzred.arex.mars and the one about the almost legendary Native Martians has ‘citation needed’ scattered throughout. The info dump is frowned on in modern fiction as the smart writer is meant to fit all that stuff into the narrative. Personally, I don’t mind it. Better a good info dump than narrative made clumsy by squeezing it in.

Trish’s friendship with the Martian is a major plot point as the natives have a secret way of accumulating water. The corporate power of Arex depends on its scarcity and keeping the colonists in debt so they can be exploited. The ambitions and efforts of the local skating team to win a big competition also tie in nicely to the plot and it all comes together in the last chapter.

The art was okay as modern goes. Presumably drawn using a computer, it looks like outlines coloured in. There’s no blood, guts or sex and in fact this is a competent clone, in graphic novel form, of a decent Heinlein juvenile novel from the 1950s which is a hard act to follow but a good one to emulate. Some plot points might have been made more clearly and better art would have raised it a couple of notches on the must-have scale but all in all it’s an able job of work and may be extra popular with young females.