The sub-title of the book ‘The Expanding Art Of Comics’ is ‘Ten Modern Masterpieces’ which should give away the nature of this material. French writer Thierry Groensteen treats this globally so don’t expect the usual candidates, well, other than ‘Watchmen’. I also have a feeling, you’ll be like me, and not know most of the choices. I tend to see that as warning signs because it can make things harder to assess when the author has all the knowledge that you can’t contest. To be fair, he does include samples of artwork so you can at least make any judgement calls on that aspect yourself. All choices beyond that are subjective to Groensteen’s own taste. I’ll point out where the material is still available where appropriate. As he doesn’t speak or read English, his choices were either in French originally or translated. 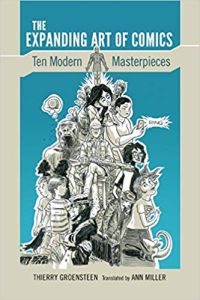 Italian creator Hugo Pratt (1927-1995) is his first choice with ‘Ballad Of The Salt Sea’ (1967-1969). Looking at the page samples, even allowing for the time frame, shows a linear approach in Pratt’s art framed within the panels. I looked him up on-line and that seems to be for all his material. As such, I suspect it is the strength of the stories that appeals to Groensteen. Although the story only have an original print run of 30,000 copies, it has been reprinted since although looks a tad pricey.

I came across Mobius (1938-2012) with his ‘Airtight Garage’ when I was reading the American edition of ‘Heavy Metal’ at the time and still not sure quite what was going on. From what Groensteen shows here, when Mobius first drew a couple pages as a joke for the original ‘Metal Hurlant’, which he co-founded, neither did he. However, his fans wanted more and he carried on from 1976-79. If you’re like me and still didn’t quite get it, Groensteen explains a lot about it here. Shame the graphic novel versions are really so expensive.

Not so, Groensteen’s third choice, ‘Watchmen’, still readily available and throw away your geek card if you haven’t read it. This is the first opportunity I had to gauge Groensteen on something I knew and he covers a lot of the sub-text of Alan Moore and Dave Gibbons’ best known opus. I was wondering if he was going to explain the Black Freighter story but it only gets mentioned in the notes and he thinks it got in the way of the rest of the story, which I tend to agree with him on. He covers the sub-text of the series and if you think you’ve missed anything then this chapter will make you think.

I did think I made a mistake reading about David B (the pseudonym of Pierre-François Beachard) and his story, ‘Epileptic’ (1996-2003) straight after, mostly because little of it made as much sense. Of course, it could be the French look at comics. The graphic novel is out there and examines epilepsy although I’m not sure about Groensteen with its significance. Maybe the art was confusing me.

I’m not very good at choosing the top 10 of anything, mostly because I’m too mercurial and limiting a list excludes some should be included. Even so, looking at other people’s list, my brain will look at any patterns in their choice. With Groensteen’s next two choices, both of who are personalised autobiographical and not surprisingly originally in French, I felt this was a clue.

Alison Bechdel’s ‘Fun Home’ (2006) about discovering she was a lesbian in her childhood and Dominique Goblet’s ‘Pretending Is Lying’ (2007) about her problems with her parents would certainly qualify for that. Both being fairly recent, their books are relatively cheap.

Oddly, Shaun Tan’s ‘The Arrival’ (2006) doesn’t need translation because there is no dialogue but dealing with displaced migration. In contrast, Craig Thompson’s ‘Habibi’ (2011) is slightly more fantasy although looking at some truths in a North African story of harems and eunuchs.

Chris Ware’s story, ‘Building Stories’ (2012) is essentially a soap opera done to comics of the life in an American apartment block. In contrast, Jens Harder’s ‘The Grand Narrative, Alpha (2009), Beta (2014) is more SF. Although the sequel hadn’t been released at the time this book was, essentially it is the story of the universe.

Although I’m not sure if I would want to explore all of Groensteen’s choices, you do get to explore other comicbook narratives out there that you might not have come across before. If you like looking for the unusual, then this book will certainly serve your purpose.