Author Greg Loftin points out in the introduction of his book ‘Writing For The Cut: Shaping Your Script For Cinema’ that the art of film editing is almost arcane simply because editors keep so many secrets about the directors they work with. Thing is, editors are the people who shape the material the directors give them into the story you see on the screen and so have a very important role.

Obviously, the directors are there when the cut is made but they also listen to what these editors suggest as well. I suspect they all know that they’re probably too close to the material to give an accurate assessment, even if they work to the cut. As such, there has to be a lot of things that wouldn’t be talked about in public but it does limit explaining how editing is done. Loftin interviewed 10 editors but had to be cautious over quotes because of the nature of their work. However, his examples are first class and include several SF examples. 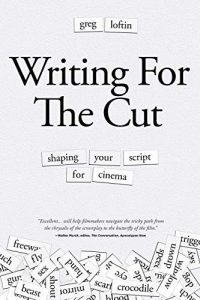 I know there was a change when scripts no longer covered details of how the scriptwriter could point out scene detail for the director but I do wonder if that applies to director/writers who fulfil both roles and their visualisation. Maybe they make differing copies?

Something director Mike Nicols points out is ‘…upon entering a room full of people, you find them saying one thing, doing another, and wishing they were doing a third’ did make me think as that is relatively easy to do in a film but very hard to convey in prose for a bunch of characters at the same time for the reader to keep up with.

The same also applies for scene cuts across events happening at the same time, as with the example from ‘The Godfather’ here with Michael Coreleone at the christening while his hitmen took out the heads of the five other Mafia families at the same time. I watched the film again the other night and there are examples of this technique throughout maintaining the pace and how time moves on.

Loftin points out that scriptwriters do actually write for the cut of the film although that is the limit of their involvement. Film making is a collaborative process. Reading here how bringing an editor in early can also save money if scenes aren’t needlessly made if they aren’t likely to appear in the final cut. Although not quite said, the implication is they can also ensure filming enough of what they also need is covered as well. As Loftin says, even the best editors can’t make a good film out of a sow’s ear but they can take some of the sting out of it.

I think one of the biggest failings in the amateur field is understanding how a film can be made or broke at the editing stage, so this small book should be on everyone’s shelf or hands if you’re moving in that direction. Once you have an understanding of what is essential, you’ll probably find it makes it easier to make a sharper cut of the film.