The biggest problem with Brian Cremins’ book, ‘Captain Marvel And The Art Of Nostalgia’ was discovering that there was just over 18 pages of footnotes at the back of the book with details that needed to be looked up when reading. I know this is a bugbear of mine but surely if the information is so important then it either needs to be put in the main text or footnoted on the same page for easier access.

More so when there are 20 pages of books cited as well. Good luck with reading all those books, although with several pages of acknowledgements, that I dutifully read, you probably learn more about his sources there, including TwoMorrows publications which Cremins also has written for, you get a better inkling on the subject matter. 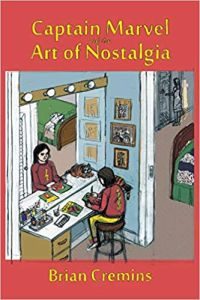 The initial focus is on Captain Marvel’s artist, C.C. Beck who preferred simplistic line to making comicbook narrative too complex. I do think there’s room for all sorts but some of what he says makes sense. Of course, there has to be a touch on the legal battle between National Periodicals (DC Comics) and Fawcett over comparisons between Captain Marvel and Superman. Rather oddly, the court case compared Action Comics # 2 and Whizz Comics # 2 where both super-heroes are lifting or throwing cars. It does tend to show that symbolism does become surreal. Considering that if either vehicle hit their assailants then they would surely kill them and was just a threat. Throwing bicycles at them would be equally dangerous but look less dramatic on a comicbook cover.

Cremins points out that Harlen Ellison was quick to dismiss supporting character Mr. Tawney, a serum-induced talking tiger-humanoid, presumably that also came from the serum, from the Captain Marvel mythos when he was planning to devote a chapter to him. However, reading this second chapter, Tawney is obviously writer Otto Binder’s way of introducing himself into the comicbook.

The look at the use of Captain Marvel during World War 2 brings a sharp contrast to his contemporaries which I wish Cremins had drawn comparison to. After all, Captain Marvel’s comicbooks were light in comparison to them. Crimins also points out that the kit the American soldiers were wearing in Captain Marvel’s comics were WW1 attire so there isn’t even accuracy. Even its artist, CC Beck, thought it was a mistake to bringing Billy Batson and his alter-ego to the front line and into our reality. To have his comics and a couple bars of chocolate in bags handed out by women to battle-weary returning soldiers from the war unnerved them as many had turned both adult and killers by their experiences. This is a very telling chapter.

So, too, is the one looking at Steamboat Bill, a stereotypical black character introduced in 1942 and removed in 1945 after a bunch of kids visiting Fawcett and convincing editor Will Liberson how his image degraded black people. As a result, Steamboat was instantly dropped. Cremins gives some other examples from the time although omits ‘The Spirit’s Ebony character. CC Beck himself pointed that stereotypes were quite common back then. Looking back, although I can understand their removal, it did also remove black characters from various titles rather than bring them up-to-date which I think was a bigger mistake. This chapter is enlightening.

The final chapter examines our taste in nostalgia and how fanzines were an extension of the letters pages that appeared in comics and magazines. Cremins points out that we like to wallow in our memories which should make you ponder on the generation coming up who look in smartphone viewscreens and not spend time developing personal experiences and things to look back at.

Contrary to my criticisms in the opening paragraph, there is a lot to learn from this book that extends beyond Captain Marvel and I ended up finding it an intense read. Keep your memories healthy.