As the title, ‘Women Scientists In Fifties Science Fiction Films’ should tell you, author Bonnie Noonan is looking at female career scientists in the movies. If you’ll forgive me, that’s not rocket science. The obvious thing from Noonan’s introduction is that she is both a feminist and Science Fiction fan. Nothing wrong with that, although I do think the opening chapters where she compares comments made from books by various people could have been spent giving her own opinions more. Then again, I doubt if Noonan is hiding the fact that this is a scholarly book with stacks of footnotes at the back of the book. Being well read on particular books which gives an interesting bibliography is probably seen as an indicator that an author has done the work but a reliance on so many quotes tends to pad than express opinion because you end up relying far too much on other people’s opinions whom you agree with rather than balancing things out with contrary opinion if taking that route. If anything, having female scientists in the American fifties B movies was a reinforcement that there was career opportunities in the laboratories out there which in itself wasn’t a bad thing. Indeed, Noonan went through such desires herself. In reality, there was still a struggle to be seen more as a scientist than as a woman being a scientist in these films, especially as she spends a lot of time with the words of the male lead’s reaction.

One observation Noonan points out on page 38 is how many of these lady scientists had male-sounding forenames or abbreviated down to same. Although she doesn’t go further than that, I couldn’t help but wonder if they were originally male characters and someone had to remind the writers that they needed women in the cast and they then combined as also a love interest and reduce the core cast and in B movie terms that did save some money. It’s also of interest that Noonan points out that ‘Rocketship X-M’s crew was used as the template for several films after suggesting that producers saw this as the right balance. It’s no wonder we never had two females in the cast.

Reading the book and dialogue examples, the male response to having a female scientists follows the lines (sic) of denial and disbelief and later begrudging respect. I wish Noonan had pointed out that sexism was still blatant back then even in regular reality and that the American male tended to think a woman‘s place was in the home. All Noonan describes is the woman having to prove her worth to the team rather than accepting she was there because of her expertise. To be fair, Noonan does prove this with her examples, it just that the men there have to be shown it.

Noonan points out that in terms of relationships that the man and woman would invariably act like parents to the third character, even if he was of a similar age. To my mind, triangular relationships isn’t unusual and it can vary with different or same sex ratios and there are many famous examples over the years.

I should point out that there were lady scientists in the movies since the fifties and indeed Noonan in her conclusions at the end gives examples since and especially those continuing the need for eye candy. Thinking about it in our genre, it’s not until ‘Alien’ (1979) that we had two women in the cast but neither were scientists. Although the focus is on our genre, I think Noonan would have helped her point had she shown some examples of scientists in films outside of our genre if for no other reason than to show how they were treated there as well because it would have put things in perspective. After all, women were invariably seen as the love interest and having an occupation pertinent to the action was the only way to keep them in the central plot. They could hardly be seen brewing tea and being the scientist gave them the means for exposition of the plot but less in the action for the men. I would have classed this as more peripheral myself. Of interesting note, Noonan points out the writers’ credits that I didn’t spot any women scriptwriters so it’s still essentially a man’s point of view of how women behave.

As with all books of this sort, it’s how much you think or react that can often tell you the value of the text. I do think Noonan could have gone a lot further in her analysis but as I seem to have made that extra jump, I can only assume you’ll do the same after reading this book. If anything, it would have been interesting to see the jump from when women were not only scientists but also shown to have other career opportunities within our genre films. 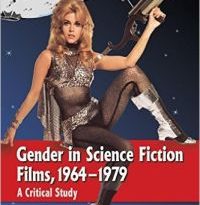