In many respects, subtext is an inner or double meaning more than what is said. As author Linda Seger says in her book, ‘Writing Subtext’, it allows for deeper implications that the viewer can take on-board when watching a film to give a bit more depth without taking more time. With film time being precious, this makes sense. It allows some aspect of the plot to develop and show change without necessarily being over-dramatic simply by adding an extra layer to what is going on. Throughout the book, there are film samples to show and explain how this is done. If you’ve ever thought that names were chosen to match the type of character, then you’ll be either relieved or pleased to discover that many names are as Seger points out some context examples. In many respects, it short-cuts some information that you’ll absorb without having exposition for.

There are tests at the end of each chapter to assess how much you’ve learnt and samples taken from all genres, including our own.

Can this be applied to standard prose? Very much so although I suspect that you need to establish the perimeters of the characters and re-enforce various traits. The one thing any writer needs to establish is that even the most honest people can tell white lies for whatever reason and the more dubious characters tell real porkers. Using subtext can only help to dimensionalise the characters if you want your readers to take a second look at what you’ve written, especially if you want other implications used.

In many respects, this is a light read. This is contradictory to the extra dimension it is supposed to be adding to a film or story but thinking about it, you don’t need much more than is shown here. Subtext is the icing on the cake. It might go over the heads of some viewers or readers but it’s there to be picked up on a second viewing or read and ensures understanding the characters better. For us writers, it’s just an extra string to our bows, so if you aren’t that familiar with subtext, now is the time to do so.

check out websites: www.mwp.com and www.lindaseger.com 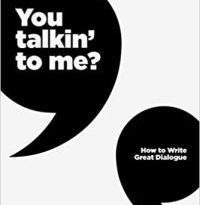 You Talkin’ To Me?: How To Write Great Dialogue by Linda Seger & John Rainey (book review).

You Talkin’ To Me?: How To Write Great Dialogue by Linda Seger & John Rainey (book review).