What seems like a lifetime ago and is probably much more than that for some of the readers of this is if students wanted to watch a favourite TV programme, they had to gather in a communal area and share one small screen. That was how we watched ‘Star Trek’ when it first appeared. We didn’t care about the realities of space travel.

It was pure adventure, the Wild West amongst the stars. It didn’t matter that the crew should have been weightless or that communications would not have been instantaneous. This was the future and, like the problem of going faster than light, scientific advances would have solved these problems. Jilly Paddock’s ‘Warbird’ is in the same vein. 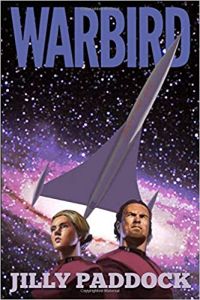 The year is 2312. In the intervening centuries between now and then, humans have developed FTL drives and colonised a number of exo-planets. Not only that, but the crews take for granted the artificial gravity and ansible communications to the extent that they are never mentioned. At this point in time another, faster FTL drive that utilises void space has been developed and preparations are underway for the maiden flight of the Vienna. In nominal command is Quinn Gresham with Rachel Murray as his second. In reality, they have equal status along with the AI Warbird, which is masquerading as a computer.

The inaugural flight goes well until they find a damaged, alien spacecraft with injured beings aboard and find them plunged into a war between their new friends on the planet Gemmdis and the human fleet and they have to find a way to broker peace.

This is a straightforward space adventure, an example of space opera that harks back to the days when readers were less sophisticated and didn’t want a logical, scientific explanation for the problems of space-faring. It is not without its issues. It is not really explained why there is a Space Fleet, the strict navel arm of Earth’s defences, and the Terran Space Corps, unless the latter is purely engaged in exploration and is intended for first contact missions. That doesn’t explain why Vienna is so heavily armed with planet-busters unless the TSV is intended to be a parallel of the East India Company which was a commercial venture beset by pirates that existed at the same time as the Royal Navy in the days of sail.

While it is necessary to project different images of the regime aboard the Vienna and regular ships within the Space Fleet, there are very good reasons for discouraging relationships between personnel. Mostly, these are related to professionalism and discipline. Anyone who has worked in an office where couples have fallen out will be aware of the uncomfortable atmosphere it generates, a situation that will be magnified by the parties not being able to escape each other. The rule of keeping it out of the workplace applies and keeping it off the spaceship even more so. If the quantity of sexual activity between members of Vienna’s crew had only become apparent once the aliens had appeared, it would have made more sense due to their very different social mores.

I am personally uncomfortable with the degree of misogyny displayed by members of the hierarchy. While there will always be some individuals whose personalities or backgrounds give them views unacceptable to society, even today, when we know it is still rife in some areas. When the tale is set three hundred years in the future, such blatant misogyny should not, even if deep underground, be expressed so blatantly without being seriously smacked down by authority. A prejudice against alien species is understandable in some quarters, especially as they are an unknown quantity and when they have declared war. That prejudice is on both sides, partly because of misunderstandings, partly because of the ambitions of the authorities in each case not willing to accept the truth because it gets in the way.

There are areas where the main characters, Gresham, Murray and their alien friends, act without thinking through the situation. To broker peace, they decide that the only way to convince the Gemmdians that they are mistaken and have committed an unpardonable crime is to show the population that the ‘animals’ they intend to exterminate are actually intelligent, sentient beings (a human colony) is to introduce a sample for them to examine, then rouse the normal populations outrage at the authorities ie foment revolution. The logical approach would be to tell the threatened colonists and get willing ambassadors rather than kidnapping a couple. Throughout, until the very end, no-one thinks diplomacy and talking might be a good idea.

There must be an ambassadorial team trained to deal with non-human species as the implication is that the Vrauthi are an alien race. While these characters never meet them, there has been a territorial dispute over planets in one star system which is resolved temporarily off-stage. It does seem strange that this team is not dispatched to try to negotiate the cessation of the new conflict.

There is also an excellent frontispiece by Jim Pitts that shows how author Jilly Paddock envisaged her aliens.

Having said that, such considerations may not matter to potential readers as what they are looking for is a space adventure with lots of daring-do. If so, this book will provide it.