There’s always a question of just how big can the Haynes books get? I guess David M. Harland’s book, ‘Universe: From 13.8 Billion Years Ago To The Infinite Future Owners’ Workshop Manual’, says all the way to the top. 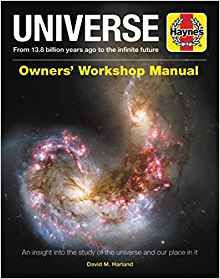 As I’m pretty familiar with a lot of this information so I was literally here for the ride. You get loads of photographs and, rather more unusual, paintings and, when cameras came along, photos of the people who discovered things. If you ever wanted to know what the people whose phenomenon and celestial objects were named after then your dream will be fulfilled here. I should also point out that this book mostly avoids the traditional ground of thinking the Earth was the centre of the universe and how the church dissuaded scientists who thought otherwise.

It’s also worth mentioning that many early astronomers were amateurs and developed their jobs by their discoveries. Of course, with the coming of telescopes and how they got refined, better studies were made and cameras meant star counting a lot easier in the day. You obviously get some science here as well but it is all explained and you should find understanding parallax and the Doppler effect better as the means to measure stellar distance. You even touch on gravity flutter to work out which stars have planets.

What shouldn’t be a surprise is how quickly our understanding of the universe moved on in the last century. Everything from understanding nuclear fusion in the sun to mapping the cosmos using radio telescopes, not to mention hearing the background hiss the universe generates.

Books like this would be going amiss if they don’t cover black holes and this one explains them well. Equally, you get some insight into dark energy and matter and its effects on the pull of gravity. They also explain that the name is a bit of a misnomer until a better name comes along.

Towards the end of the book, we are back to examining the planets and moons of our own Solar system and the improved chances of some form of life on the moons of Jupiter and Saturn. Future space missions there are greatly exciting the space community as it will be reassurance that other forms of life in the universe is possible. When you see the number of star systems per galaxy, we can’t be the only ones. It’s only distance that is going to prevent meeting any of them.

About the only thing missing from this book is an index but considering this is also the history of the discoveries about the universe, it’s in pretty much chronological order, so if you know what you’re looking for, then it shouldn’t be able to get the right year.

Haynes books do a marvellous job in presenting different aspects of the various space programs and astronomy in general and this is another book to add to your shelves after reading it. 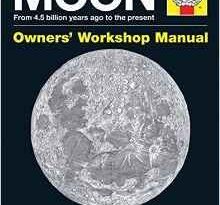 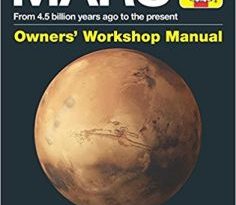