It’s with a little trepidation that I approach ‘The Rosewater Insurrection’ by Tade Thompson. The first book left a lasting impression on me as it was quite different to the other books I had been reading at that time. It was also very well written. On one hand I’m please as the publisher is saying ‘Rosewater Insurrection is the second book in the Wormwood Trilogy’. So, there’s going to be at least another book. On the other hand, can the author maintain the high quality of the first book? 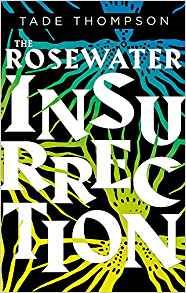 For those unlucky people who have not read the first book, ‘Rosewater’, I should point out that ‘Wormwood’ is the name of the alien identity that lives beneath the Rosewater township. Rosewater is in Nigeria and not too far from Lagos. Due to the presence of the dome built by the alien Wormwood, the growing township of Rosewater encircles this dome. In the gap between books one and two, Rosewater is closer to being a city rather than a township.

I’m happy to say that the almost anti-hero character Karoo from the first book features strongly in this instalment. Karoo has some special abilities which are a bi-product of the alien macro and microorganisms introduced into the earth’s atmosphere by the aliens. One of the endearing factors of this second book is we learn more about the aliens and it’s not quite as straight forward as it seems. This is not as simple as a genocidal murderous species hell-bent on wiping humans out and taking over our planet although the end result might amount to the sane.

The main focus of ‘Insurrection’ is the mayor’s attempt to declare independence from Nigeria and establish Rosewater as an independent city state. Naturally, the President of Nigeria is not a big fan of this move and things quickly escalate to open hostilities. It would, of course, be a one-sided contest between a large populous nation and a small fledgling city state but for the presence of its alien resident Wormwood.

Unfortunately for Mayor Jack Jacques Wormwood is ailing due to the onslaught of an alien plant which is also sentient. How and why the plant suddenly appears is a mystery to the humans, but it does become clear and its quite surprising. It’s just one of the surprises in this tale of Rosewood’s development.

Femi Alaagomeji is still the boss of S45, the Nigerian secret service organisation trying to fight back against the alien invasion. One of her main agents is Aminat Arigbede, a very capable lady whose boyfriend happens to be Karoo. S45’s takes an interest when one of the local Rosewater residents registers as being 79% alien and its Aminat who’s tasked with tracking down the individual. A job made much harder due to the deteriorating situation within Rosewater.

With Wormwood somewhat distracted, things do not go well for the human population of Rosewater in the face of increasing hostility from Nigeria. Things quickly start to look bleak for the breakaway city state and then things get worse and then even worse. I’m loathed to give away any plot spoilers, but I did find it hard going with one setback after another and another for our main characters. It’s worth persevering though as the ending is well worth it.

I’m pleased to say that Tade Thompson has delivered another belter of a book. I don’t think it is a standalone book, though, and you will need to read volume 1, ‘Rosewater’,- to get the maximum from this book. In addition to more information about the invading aliens we also learn of a secret African society and there’s a few more hints about what could be a time travelling well-wisher. I can’t wait to find out what happens in the concluding book. 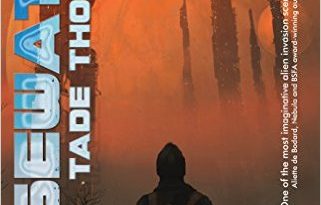