‘The Secret Of Marrowbone’ is a horror/mystery/suspense drama written and directed by Sergio G. Sanchez who also wrote ‘The Orphanage’ and ‘The Impossible’.

Marrowbone is the house where Mom grew up and she takes the family back there to make a new start after recent traumatic events. Daddy isn’t with them because he was the traumatic event. They enter the house and she tells them they are no longer Fairbairns but Marrowbones and a whole new life awaits them free from turbulent troubles past. Ha! 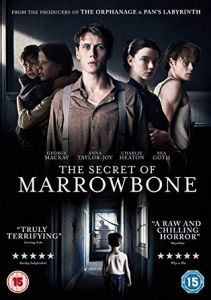 Apart from Mom (actress Nicola Harrison), there are four Marrowbones. Sam (actor Matthew Stagg) is a little kid, maybe eight years old. Jack (George MacKay) is the eldest and the film is really his story. Billy (Charlie Heaton) is roughly Jack’s age but wilder, more adventurous. Jane (Mia Goth) is a teenager. Marrowbone is a big house and they settle in happily, even making friends with Allie (Anya Taylor-Joy), a young lady from a neighbouring farm. When Mom dies (spoiler but not much), they swear to stick together. Unfortunately, Jack isn’t yet twenty-one and if the authorities discover Mom’s death they will be put into care, perhaps separated. Therefore they keep her death a secret.

The film is set in 1960s USA as we discover when Jack makes his weekly trip to town for shopping and sees a lunar module on television in a store. He also visits the library where Allie works and it becomes clear they are having a romance. However, there’s a rival. Lawyer Tom Porter (actor Kyle Soller) also pines for Allie and he’s smart, educated and heading for a job in New York. To complicate matters, he’s in charge of legal transactions relating to Marrowbone and wants Mom’s signature on a document and she’s dead!

The plot would serve pretty well for a straight drama but there’s horror to add spice to the mix. It starts with a few broken windows and the disappearance of Sam’s pet. Then there are creakings and mysterious sounds from upstairs. A ghost? Something worse? I won’t spoil it.

After a bit of a slow start, ‘The Secret Of Marrowbone’ really sucks you in. Jack and his family are a likeable bunch and any viewer with a heart will feel and fear for them. Cleverly, it’s not clear for a long time whether the looming menace is natural or supernatural. The creepy parts build the tension neatly with the usual techniques: darkness, sudden movement and surprises. There’s not much gore and not much violence. It’s quite old-fashioned really.

I enjoyed it, mostly because it had a proper story and didn’t just rely on scares and thrills. There were times when I was slightly confused, especially at the end when the appearance of the menace changed from one scene to the next but perhaps I missed something. All in all it was a good B-Movie and a pleasant way to pass 110 minutes.

For some reason the US version is titled ‘Marrowbone’. 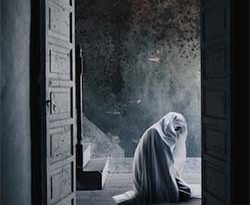 The secret of Marrowbone (film trailer).

The secret of Marrowbone (film trailer).