With a title like Amy Treadwell’s book, ‘The Red Book Of Luck’, you have to ask yourself do you feel lucky? I tend to believe a lot of the time you either make your own luck or random chance or serendipity helps things along. As a writer, I have to be interested in what other people believe. As such, this book looks at everything from symbols, charms, good fortune and superstitions amongst other things in its 7 chapters.

Although it appears bad luck has only the odd token appearance here and there until the last section, it is more related to what one deems good luck in one place is not in another. In that respect, isn’t good and bad luck, the same side of the same coin? After all, if one person is lucky, then the other person may not be. After all, the world is made up of winners and losers and the people cast in such roles do switch sides. 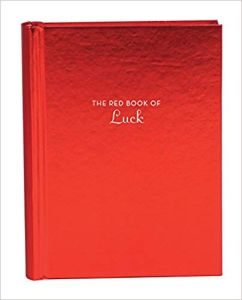 Occasionally, I’ll look at something noted and see a different reason. Take ladybugs or ladybirds, as we call them in the UK, for instance, an abundance of them is seen as lucky. From my perspective, it’s bad luck for the aphids that they feed upon. Three-leafed clover or shamrock is as lucky as its four-leafed version, just that the latter is rarer. Although I’m not a tea-drinker, seeing what you have to do with its dregs will make you wonder why you use tea-bags. Mind you, it just goes to show that some traditions don’t last. Superstitions only work if you believe in them and only a few noted in this book are for logical reasons.

Equally puzzling was how pennies were seen as a lucky talisman. Considering the number in my pocket, I should be really lucky except they are supposed to be in the left-hand pocket. So why do trousers/jean manufacturers put fob pockets on the right hand side or why not on both sides so you have a choice?

Initially, I was surprised to see a couple entries for rocks that brought actors luck and then realised that they are very superstitious and wondered why they hadn’t had more entries. Oddly, opal, which is supposed to be unlucky, doesn’t get an entry at all.

There is a section devoted to luck in different countries. Only in Russia do they consider it lucky to be pooped on by birds. I wonder if they have an in-land seagull population to change their minds? I did find out why we British are supposed to find chimney sweeps lucky but its less about their profession and more from one of them saving King George II from his runaway horse.

As this is an American book first, the sports superstitions of luck are based on American sports. Looking at what is described for some of these sportsmen, it’s amazing that they found any time to play.

If you ever wondered on where the term ‘jinx’ came from, then you need to thank the wryneck or jinx torquilla with its 180 degree head turning ability.

I have to confess that I wasn’t sure what to expect from this tiny book and ended up coming away with a lot more knowledge than I’ve given examples of here. I do think the art pages are more as fillers than useful but that’s the luck of the draw.

2 thoughts on “The Red Book Of Luck by Amy Treadwell (book review).”