I guess comparisons with Andy Weir’s ‘The Martian’ are inevitable for S.J. Morden’s near-future Mars thriller, ‘One Way’. I can’t really make those comparisons directly though as I’ve only seen the film and not read the book of ‘The Martian’. Mars has almost its own personality: ancient, dusty, red and forbidding.

It has featured in so many tales that it seems just as familiar as our own Moon and, with manned missions to Mars mooted on a regular basis, it seems almost inevitable that mankind will be there sooner rather than later. ‘One Way’ posits a new, yet familiar and ages-old, way to get a habitable Mars base ready for use: slave labour. In this case, it’s actually condemned convicts who are given the chance for meaningful work and a new kind of prison following their one-way trip to the red planet. 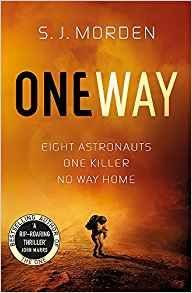 Our main character is Frank, serving a life sentence for murder, but with a sympathetic back story to give us something to care about. The other convicts are more of a mystery to Frank and to us. Training is harsh, their treatment bordering on the inhumane, but all along it comes across as realistic. Then they arrive on Mars and the magic of that ancient planet brings new life to an already gripping story, imbuing it with grandeur and peril.

Interspersed among the chapters chronicling Frank’s travails in training and, while building the base on Mars are internal reports and transcripts from Xenosystems Operations, the company contracted by NASA to build the base in advance of a manned NASA mission. A bit at a time, they fill in the back-story of how a legitimate commercial contract ended up using dangerous convicts for such a huge and dangerous job.

Frank was a construction manager before jail and the other convicts have various relevant skills which they each put to use as the base takes shape despite the shortcomings of the plan developed by XO. A tension constantly bubbles under the surface between the group, all of them unsure whether their workmates are still dangerous, likely to snap and stab them or poison their food. Mars is already dangerous and provides plenty of opportunities to die through accident or misadventure and that underlying threat adds to the building tension as things start to go wrong.

Unlikely as it may sound to pressgang a bunch of convicts into travelling to Mars and building a permanent base, the rationale behind the plan is explained convincingly and ultimately seems inevitable. The back-stories of the convicts, brief as they are, provide compelling reason for them to sign up and the prospect of living the rest of their lives on Mars appears to be an improvement over life in a maximum-security prison. Slowly, throughout the book, hints of deals and agreements begin to leak out, offering the chance that things could be even better in the future. The NASA team are on their way, the clock is ticking, Mars is deadly and the corporation is ruthless. It all adds up to an explosive cocktail.

It’s a fascinating concept with enough detail of the habitat to provide realism without getting bogged down in the detail. S.J. Morden’s prose is straight-forward and clear, the dialogue realistic, suiting perfectly the setting and the hard-edged characters. Part near-future, hard SF, part-thriller, ‘One Way’ delivers a compulsive, claustrophobic story where there is literally no way out and nowhere to hide. 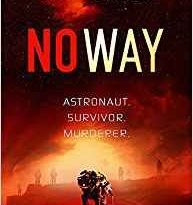 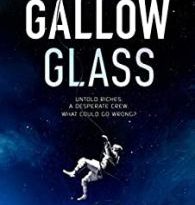