If you are new to ‘The Invisible Library’ series you will be pleased, although your wallet might not be, that ‘The Mortal Word’ by Genevieve Cogman is the fifth book and you should catch up on the others first. 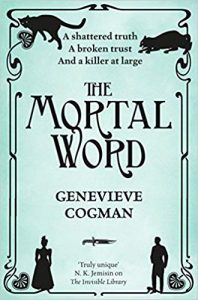 Looking for a new kind of hero? Look no further, the librarian has broken out of the Library and is having adventures. To be clear, this is a particular kind of library. The Invisible Library is a force for stability between order and chaos. They are those who say ‘shush’ to the dragons who rule the worlds of order and ‘Quiet Please’ to the Fae who rule the worlds of chaos. Most worlds are in-between with, hopefully, no input from either but the Library is ready to invalidate the lending cards of those who go too far.

Our librarian, know as Irene Rivers, is Librarian-in-Residence in a Victorianish world with an apprentice called Kai, who happens to be a dragon. He has recently ceased to be an apprentice (see the events of ‘The Lost Plot’) and now their meetings are ‘accidental’. When Irene’s friend, the Holmsian Detective Vale, is called upon to investigate a murder at a peace convention between the Dragons and Fae, she is sent as well. The murder could wreck any chance of a detente between the opposing forces.

Irene is dismayed that two other investigators are also appointed, the Fae, Lord Silver and the female dragon, Mu Dan. Irene must cope with the peculiarities of the Fae, who all believe themselves to be the star of their own show. They are ‘characters’ and, in Lord Silver’s case, he’s a seducer and, because of the magic surrounding him, nearly successful even with Irene’s iron will. Other Fae in this novel are the Cardinal, who wields immense power in the Fae world and the Princess who can only do good because that’s her character, like a super-sweet Snow White. That, in short, is why their worlds tend to chaos.

I love the inventiveness of this series. The Fae must act out their own plot and cannot break out of their character traits, thus providing some very good and occasionally funny moments. The dragons are incredibly powerful but can appear as humans. They can also influence the elements which can make things very thorny and occasionally life-threatening.

Librarians are able to use something called the LANGUAGE which, when spoken, makes that which is spoken actually happen. So she really can shush everyone, although overuse can cause sickness. It can’t always get them out of risky situations but, luckily, Irene has a clever brain and with teamwork alongside her fellow investigators there’s a chance to save the day.

The mysterious Library may also have hidden motives. If the dragons and Fae make peace, would the Library be needed to maintain order anymore? Irene must determine those with potentially dubious motives which may be clouding the truth.

With superb locations in strange alternative worlds that share similarities with our own, mysterious characters and a Library that never lends out its books what’s not to like? This is an adventure for all to enjoy. Our plucky hero takes on everyone, whether there is a chance of winning or not. If I’d read this as a teen-ager, I probably would have done that librarian training, though I suspect the everyday life is not quite as exciting as this. 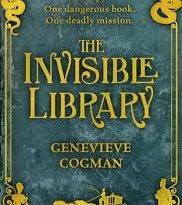