Decades ago, a killer stalked the streets, leaving behind the remains of his victims carved into hideously realistic flowers. Louis Chabon, famed surgeon and healer, was finally captured and executed for his crimes. No one knows how or why a death mask was made containing Chabon’s knowledge of human anatomy and skill with a knife, but one was.

It rested under lock and key in the vaults of the Chief Magistrate, never to be worn. Until tonight. 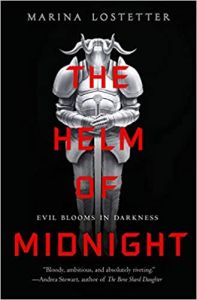 Krona Hirvath did not think it was a good idea to have such a potent artefact on display at a party, even with her whole company of Regulators guarding the display. Even worse, she is proven right when the mask is stolen and the killings begin again. No one ever looked for a motive for Chabon’s murder spree, but Krona now finds herself over her head hunting for a killer that may have at least one God on their side.

‘The Helm Of Midnight’ is Marina Lostetter’s first fantasy novel and a departure from the generation spanning Science Fiction of her ‘Noumenon’ series. At its core, ‘The Helm Of Midnight’ is a crime novel, complete with a low ranking investigator with ‘issues’ that can take a punch and still keep hunting. It’s a familiar premise. Rare and dangerous item is stolen from someone rich and influential and a lowly ranked detective goes after it with more and more determination as a conspiracy is slowly uncovered that threatens the entire world. It is not only human civilisation that will crumble, but the very fabric of the Earth.

Like all good detectives in dark worlds, Krona knows how to take a punch and keep on investigating without missing a detail. Krona is a great protagonist as it is her gaze that brings the world to life, giving us a view into a world full of brilliant details that Lostetter has woven together. Krona’s world starts out as a world that is familiar in a vaguely medieval fantasy way but then all the details begin unfolding past the horses and sabres. The entire world is a single valley surrounded by a shield wall built by the gods.

Monsters live outside the barrier. Currency isn’t coins, it is literal minutes of time that has been compulsorily extracted at an early age and bottled into vials that you can save up and ‘cash out’ to increase your lifespan. Emotions can be set into gems so soldiers can wear bravery on their bracers or brides can weave tiny beads of joy into her veil. You can have a death mask made to capture a unique ability so others can share it, like a knowledge of anatomy or marksmanship or even interior design. I love Krona as a character but more than that I loved her as a vehicle to show me her works.

I do one of two things when I really enjoy a book. I either get lost in reading until suddenly it’s morning and I’ve forgotten to sleep or I put the book down, trying to savour each word and not miss a single detail rushing to the epic conclusion. I savoured ‘The Helm Of Midnight’ even when it got a trifle too dark and serial killer-ish and was sad when it ended. There is so much more to discover about the world, its’ gods and its’ magic. Krona has some secrets left to tell as she continues to peel away layers of the conspiracy surrounding her.

This is a book for fans of moodily lit European crime drama, especially those with series that expand out from a single crime to have you on the edge of your seat over whole seasons.

I cannot think of a book to compare to ‘The Helm Of Midnight.’ There are many fantasy novels set around a heist, such as Scott Lynch’s ‘The Lies Of Locke Lamora’ or Leigh Burdugo’s ‘Six Of Crows.’ Jim Butcher’s ‘Harry Dresden’ has the police procedural feel but is set in a version of our world. Lostetter has combined a detective novel with liberal dashes of noir and serial killers and placed it against a fantastical backdrop of gods and magic that I highly recommend.