‘The Greatest Show In The Galaxy’ is a good example of how the ‘Doctor Who’ stories can make excellent audio books. There is a lot going on in this outing for the Seventh Doctor and Ace, not least the scariest clowns ever. When the Doctor receives an advertising satellite directly in the TARDIS, he’s eager to take Ace to the circus. But the Psychic Circus is not your average show and there is a hefty price for the tickets.

This story is another good example of the boundaries being crossed in the classic series and drawing on something deeper than the Daleks and Cybermen chasing the Doctor round a tree. As a story for children, I would imagine it would give them some long term nightmares. Not only do we have the classic creepy and destructive clowns but, at the end, there is also the matter of deities to be considered. This was taken on in some of the later audio stories by Big Finish, as the darker side of the Seventh Doctor was explored further.

There is a certain amount of letting the Doctor grow up here far more than previously, although some of the dark side is seen in ‘Trial Of A Time Lord’ and the ambiguity of the Sixth Doctor. It certainly gives material and potential for the next stage in the Doctor’s history as he approaches his 12th incarnation.

Sophie Aldred reads ‘The Greatest Show In The Galaxy’ and is notable that her character Ace is not treated very well by the Doctor. Once again, he has a hidden agenda and seems better prepared than Ace for an encounter with the strange and terrifying clowns, particularly as she has already admitted to a pathological fear of them.

This makes me want to watch this story but I’m prepared to be disappointed by the way it was originally imagined on the old budget. I’m also a bit nervous about letting those clowns into my head again. 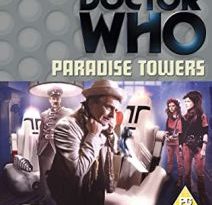