The building complex Paradise Towers is supposed to be a holiday resort and a reluctant Doctor (actor Sylvester McCoy) has taken Mel (actress Bonnie Langford) there to have a swim in its Great Pool, having shown her some promo screens. However, upon arriving in the TARDIS, they discover the place is run down. The original inhabitants went off to war and never came back and only those not eligible for war are left to fend for themselves. Those that are left mostly treats the Doctor and Mel has hostile strangers and as they escape one section, they get caught up with another. 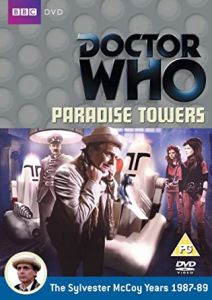 It’s a lot easier to identify the various people. We have the Red Krangs, a girl gang who admit there are three other but now only other colour girl group, the Blue Krangs are left. I have to confess that they are also a bit difficult to tell apart in their street colours. There are the oldsters or Rezzies, a couple of them Tilda (actress Brenda Bruce) and Tabby (actress Elizabeth Spriggs) met by Mel have their own agenda feeding any guests up for a meal, but not the kind of meal you would want to attend. Far more dangerous are the military-like Caretakers, led by the Chief (actor Richard Briars), who live by their rulebook although he has a different covert agenda. The Cleaners are transport type machines determined to kill anything in their path for a mysterious entity in the basement.

None of which is helped when the Doctor and Mel are split up and have to try to find each other. The Great Architech in the basement, otherwise known as Kroagnon, ups his plans to locate a new body and takes over the Chief Caretaker’s body and proceeds to ordering his Cleaners to remove all human garbage that are spoiling his building.

This causes a rebellion by all the separate factions and they follow the Doctor’s plan to beat him. All of this should be considered spoiler but light a candle for the cowardly Pex, actor Howard Cooke), who learns to become a hero at long last.

The Caretaker dialogue must have been the most complex to learn and big hats off to Richard Briars and Clive Merrison for learning it. In many respects, this approach to revolution getting different factions work together is actually the way it works in real life, although whether it all falls apart later when their own agendas are revealed is never investigated.

The audio commentary is hosted by Mark Ayers with scriptwriter Stephen Wyatt in the first episode and actress Judy Cornwell from the second episode. Wyatt provides a lot of useful information, feeling that the series was relying too much on self-referral relying on its own history. Also, when he submitted the first episode, he had no idea who was going to be the Doctor, Mel having no background to build from and where his story was going. Wyatt was effectively writing on the fly and produced the final three episodes in two weeks. As such he had no idea how the Towers’ inhabitants procured food, only that some of the Rezzies were cannibalistic. How he envisaged the Caretakers being old men and Pex more musclebound wasn’t carried out and to see his original vision, you need to read the novelisation.

From the third episode on, sound effects man Dick Mills joins them, explaining the changes over the years, but generally it is one man and ten days to get it done. These days, putting an episode together is down to a precise science and no waste effects on a deleted episode. There is also a balance between music, sound effects and dialogue back then so one didn’t swamp out the other. Oh, Stephen Wyatt had the Chief Caretaker based on Fred Kite, whom if you didn’t know was the Peter Sellers part in the 1959 film, ‘I’m All Right Jack’. The music score was written in a week. Judy Cornwall was friends with Verity Lambert from way, way back and it was her who encouraged the actress to write scripts and a few novels. She also states that Maddy was the initial start in creating Daisy for the 1990-95 sit-com ‘Keeping Up Appearances’. Don’t you love connections like this?

I was quite upset at some Who fans attitude to Stephen Wyatt with this story when they didn’t like this story and boldly ignored him at signings. I doubt if any ‘Doctor Who’ story is going to please everyone but being outright rude is appalling. Considering that Jonathan Powell, the head of the BBC, liked it at the time, at least shows the right people can like and get it.

The extras start with a 34 minute ‘Horror On The High Rise’ with Script Editor Andrew Cartmel and writer Stephen Wyatt discuss how it started with a little inspiration from JG Ballard’s novel, ‘High Rise’. Richard Briars says his Chief Caretaker was more like his character Martin Bryce ‘From Ever Decreasing Circles’ meets Adolf Hitler but not with over-acting as John Nathan-Turner thought it was. If JNT’s thoughts were with the possessed Chief then having someone getting used to a new body would have worked something like that.

The 8 minutes of ‘Deleted And Extended Scenes’ became a bit messy switching between black and white and colour but didn’t reveal anything new.

The 22 minute ‘Girls! Girls! Girls! – The Eighties’ has Sarah ‘Nyssa’ Sutton, Janet ‘Tegan’ Fielding and Sophie ‘Ace’ Aldred discussing together their times as companions. This ranges from costumes, lack of direction to what happened afterwards. In many respects, this kind of thing really needs to be done again as it gave interesting insights.

‘Casting Of Sylvester’ running at just over 2 minutes with producer Clive Doig is more to do with getting McCoy on ‘Vision On’ and ‘Jigsaw’ than getting him on ‘Doctor Who’ and just a shame they only showed a couple stills than his work there.

With the 4½ minute ‘Photo Gallery’, one interesting picture shows both Tilda and Tabby with a rat meal in front of them when in the episode it was only Tabby.

Looking at this story now, I tend to agree with them that although this was Sylvester McCoy’s first real story, there was no real establishment of his personality other than things he added himself. The story does stand quite well although I’m darned if I can tell the Krang girls from each other. 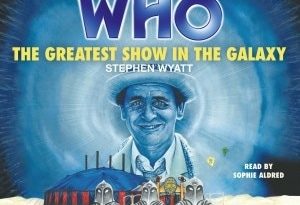 The Greatest Show In The Galaxy by Stephen Wyatt (CD review).

The Greatest Show In The Galaxy by Stephen Wyatt (CD review).