Can you imagine a particle collider, much bigger than CERN, so large in fact that it’s as big as a moon orbiting a planet? The energy involved in particle collisions would be high enough to unite the four fundamental forces, even gravity, to produce conditions that existed at the birth of the universe. In Terrence J Henley’s book, a race of people known as the Utopians carried out this out this experiment and created a new universe in the process, for the purpose of saving their own lives. Beyond their own galaxy and evil alien species called the Cycloves were making their destructive way through the universe, exterminating all life that lay in their path. They were ethnic cleansers on a grand scale. The plan formulated by the Utopians involved placing some of their own people into the new universe in order to design ways to beat the Cycloves. This essentially was The Game, a last desperate attempt to come up with a solution to the impending doom which awaited them. Within this new universe, which turns out to be remarkably like our own, if a victorious strategy does not materialise, then the Utopians would surely be defeated within their own universe in the near future.

The book ‘The Game’ begins with a birth, not just of a universe but of a young girl. Darrent of the Utopians finds himself being born as the female human Chyrmella and, once he gets his bearings, finds that being born in a different sex is not what he wanted. This was going to make it all the more difficult to formulate battle plans but, at the end of the day, he just had to get on with it as best as he could.

‘The Game’ is essentially a space opera. War games take place within the new universe but the creation itself causes problems. The Utopians have a responsibility towards the life that has been brought to existence but was that life any less valid than their own? The author makes many religious connections throughout the book and also makes use of his engineering background in describing the complexities of spaceship management. In many respects, the space opera battles appear rather quaint, almost like British naval battles of the Second World War but on a much larger scale. Nonetheless, while The Game is taking place, the real Cycloves are on the march and even the existence of the particle accelerator is in question. Should they destroy it, they would also destroy another universe and all the life it contained.

Essentially, it becomes a race against time to gather enough resources and expertise to fight the Cycloves. The flagship ‘Gateway To The Stars’ takes a prominent place in the line-up and when the final battle comes, it’s a corker! However, that’s something the readers will have to find out for themselves! Throughout the book there’s plenty of tongue-in-cheek humour, especially when the huge complexities of multi-universes and the sheer number of planets are discussed and then there’s the names of some of the ships which include ‘I’m Not Afraid Of Anything’ and ‘Wonder Woman’. Sometimes you think a Monty Python sense of humour is sneaking in when reading the text, especially with British 1960s values transported to a distant future. However, behind it all there are poignant and relevant thoughts about the nature of life and the universe itself, thoughts which the author has craftily weaved into the text.

The only thing I didn’t like about the book was the cover. Essentially, it’s a bit dull and doesn’t convey all the complexities and exciting things that take place within the pages. Something a bit more adventurous would have been better but, as with books in the past, covers change with the times and they are not necessarily static. Although it’s a long book, getting on for 500 pages, reading it was a relatively brisk process because it was essentially what can be termed as a page turner.

It’s a book to be recommended as a good read. I’m sure lots of people will enjoy it but the terrible thought remains, that being what if our own universe is nothing but a facet of an experiment in somebody’s particle accelerator and that our lives were nothing more than a game? 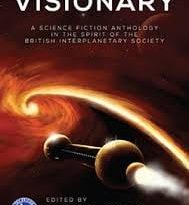