I do think people will be interested in ‘The Art Of Alien: Isolation’ by Andy McVittie regardless of whether they are game players because apart from seeing how the graphics of a computer game is put together, you also see their template. We’re also talking ‘Alien’ with its enormous fan base and a selection of original photos although there is a touch of reference to ‘Alien 3’. You’re not over-run with film photos but it’s only the crew photo that I haven’t seen before.. On pages 67-68, there is also a blueprint of the original Nostromo. As lead artist Jude Bond explains throughout, they only really had the Nostromo and its crew for the template for that period of time in the future. Therefore much of the designs is a shake and mix with a bit of taste. Those playing the game in whatever format suits them, will probably see things like look familiar and feel right at home. From reading this book, Ellen Ripley’s daughter, Amanda, didn’t just live on Earth but worked for Weyland-Yutani and had her own close encounter while on a space station when a spaceship arrives with an alien egg. The game ‘Alien: Isolation’ follows her trying to survive or rather your choices to ensure she survives. I should point out that you’re not going to get a walkthrough of the computer game here, just a chance to look at the art without being jumped on when you least expect it by the alien (not called a xenomorph at this time0 or some manic android, these are less than artificial persons judging by the illustrations. If anything, they look like the mass produced expendable model compared to the 120-A/2 model and probably just as twitchy. To give the feel of ‘Alien’, clothes and such are a mix and match from the Nostromo crew. I do wonder why McVittie thinks Dallas wore cowboy boots when it’s clear from the photo that they belonged to Lambert. Considering that she was the smallest of the group, the group photo shows at least four inch heels. She’s still short but less so. We know how much work goes into creating a computer game but seeing the designs and final image shows where all the effort goes. There are some scenes that were attempted and then dropped so you’re seeing all the options. There is also an act of beautiful ugliness with some aliens sketches that artist Bradley Wright says he could go further than a man in a suit which are worth the price of admission, witnessed by the illustrations here.

This book is mostly art than text but it shows a lot of thought and the designers being fans of the films themselves. When that shows through, one only has to hope the film is a winner. Regardless, the book is a worthy artbook for all things ‘Alien’. 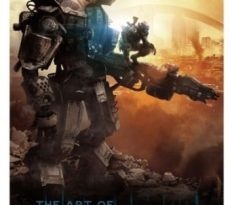 The Art Of Titanfall by Andy McVittie (book review).

The Art Of Titanfall by Andy McVittie (book review).