Showered with plaudits and the odd award, 2018’s ‘The Calculating Stars’ has already been widely celebrated as being ground breaking in genre, gender representation and setting. It is the first novel in the ‘Lady Astronaut’ series (pre-dated by short stories and post-dated by sequel novels) detailing the journey of Elma York from not especially humble origin to a really obvious spoiler alert becoming an astronaut. 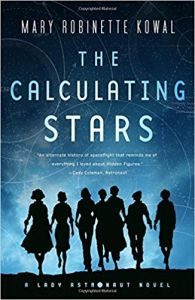 If the idea of a lady becoming an astronaut seems neither particularly astounding or Science Fiction to you, it should be pointed out that this series is set in the USA of the 1950s, albeit in an alternative Earth timeline. In this reality, a devastating meteor strike has forced humanity to look to space with substantially greater enthusiasm and desperation to get the hell out of Dodge, than JFK’s mix of Cold War one-upmanship and general can-do optimism ever managed.

This alternate 50s/60s idiom has spawned a genre which Mary Robinette Kowal has dubbed punchcard punk. Does every SF sub-genre have to be a ‘something-punk’ these days? The book is chock full of authentic and lovingly researched technologies of the 50s and 60s, as well as many incidents along Elma’s quest that mirror the space race from our own Earth’s timeline. The research seems pretty impeccable, even down to the kinds of meals prepared, clothing worn and cars driven, without being heavy-handed, giving you at times a deeply authentic sense of the 50s. There are issues with this but we’ll come back to that. First, onto the plot…

Given the name of the series and the fact that short stories published before the novel feature Elma already being an astronaut and my general SF assumption that interesting things start happening only once you’ve got into space, you might think ‘The Calculating Stars’ details Elma’s astronaut adventures. But, less obvious spoiler alert, no. This novel is all about her journey, against gender prejudice, personal rivalries, mental health issues and social norms to earn the right to enter the space race.

Working inside the project to put human beings into space and ultimately colonise other planets, Elma starts as one of the space agency’s calculators, the all female group of genius mathematicians which audiences will now be familiar with from the film ‘Hidden Figures’. From here, Elma has the inside skinny on all the issues with fuel, propulsion, technical hardware, flight-suits and even takes on the job of selling the program to a potentially sceptical public.

This in itself sounds like a pretty exciting and inspiring story, as a woman struggles against all the odds and all social norms to achieve her dreams. But Elma starts the book with a handful of aces: father: the always encouraging commander of an airbase; husband: the director of the space project, mathematical genius, experienced pilot. From the outset, it seems like there’s nothing Elma can’t do. As such, aside from the sexist social norms of the 1950s, the barriers that do appear feel slight forced and simultaneously flimsy. Spoilers aside, it’s hard to imagine anything keeping Elma York from getting into space.

That in itself is a representation positive. It’s rare to find female characters who are grounded in a recognisable and sexist world who are successfully striving towards their own, chosen goals but this is who Elma is.

Frustratingly, though, for all the authenticity in the setting, Kowal is not great at synthesising the big world changes she has set in motion with the everyday life of America. You would expect an apocalyptic meteor strike to affect the social order sufficiently that the 1950s as we knew them would turn out very differently but, the odd food riot aside, we don’t see much evidence of this, possibly to avoid Kowal’s research into the period going to waste. As such, it rather feels like a meteor hit Earth just so women could go into space and really I hope this isn’t really what it takes to overcome sexism, although also suspect it might be.

‘The Calculating Stars’ is at its best when enjoying nerdy thrills in mid-twentieth century jet and rocket-propelled technology and probably, at its weakest, tackling the social issues that it tries so very hard to take on, particularly imagining how differently history could have unfolded with the impact of the meteor and all the events that result from it. Here’s to more punchcard punk but maybe a little more subtlety in rewriting history in the future. 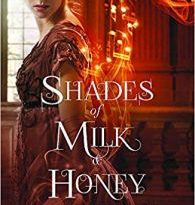