R.A. Lafferty aka Raphael Aloysius Lafferty or simply Ray Lafferty (1914-2002) has a lot of fans, hardly surprising when you see an introduction by Neil Gaiman who had a letter-writing spell with him and the number of SF writers providing introductions here. I’ve read a some of his short stories over the years but not a collected volume of them or some of his novels come to that.

‘The Best Of R.A. Lafferty’ is a good way to start, although I was surprised at his diversity into quasi-fantasy. Lafferty is quirky and a touch of craziness with it, especially with ‘Narrow Valley’ where people and objects shrink to fit into a peculiar real estate. He doesn’t explain the science just the effects. He also didn’t have any interest in SF until his mid-40s so no prior knowledge reading it. Whether that’s a good or bad thing depends on your perspective on science or SF. 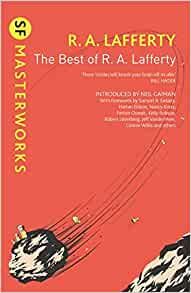 Michael Bishop points out that Lafferty was expert in any subject that is an -ology. I tend to see that as quite normal as the more knowledge the more variety in subject matter for writing stories. Even so, I would argue he applies what he knows than uses it as a knowledge base.

Lafferty also does interesting takes on aliens, giving them a sense of history even in short story one-offs like ‘Ride A Tin Can’ and ‘Nine Hundred Grandmothers’.

With any anthology, even if its with an author you want to read, there will always be some stories that hit the sweet point that will make you think the book was worthwhile. Here, for me, it has to be ‘Eurema’s Dam’ where the slow-minded Albert is obviously not the smartest child on the block and had a complicated process to work out left from right, let alone being able to write, is a savant with creating technology to make his life easy but ultimately more complicated. Lafferty underplays it in a delightful way but also pin-points how he handles characters.

Something I added in my review polish that sunk in as I continued to read that not all of Lafferty’s stories are purely Science Fiction. Whether its lack of detail or explanation of what is going on, several stories are more quasi-fantasy than purely SF. I suspect in his time, Lafferty was just after writing a good story or at least be able to sell. He certainly showed a flair for names. In some respects, this scattershot means there is something for everyone in this tome.

‘Seven Day Terror’ is another highlight with child prodigies creating a device that can make things disappear. Lafferty drops an pretence in how it might work, it just does but makes a delightful story.

‘Boomer Flats’ has three scientists seeking the abominable snowman and, without going too spoiler, doesn’t really recognise them when they find their community.

‘Funnyfingers’ is another odd delight even if the ending isn’t quite clear, The name is given to a family that have strong double-jointed fingers and able to manipulate iron and make things quickly. As you should note from above, this and using technically astute children is a common theme in some of the stories I’ve picked out here.

Objectively, the stories are a mixed bag so there will be something for everyone here. Where they are truly his best, I’m less decided about.