‘Small Ghosts’ is a novella in the horror genre. Paranormal or supernatural might be better labels in this case but horror seems to be the umbrella term for all that so let it be. The first-person narrator is Tom Maitland, a journalist who quit work after his wife died and hasn’t been doing much for the last three months.

Now his grandfather, David Maitland, is in hospital, expected to die soon and Tom’s mother is constantly at his side. Although mostly raised by his beloved Nana Liz while both parents worked, Tom doesn’t have much affection for grandad, a cold-hearted tyrant who was also a senior police detective and a darn good one by all accounts. Still, he wants to be there for mother in her time of need, so he sticks around, staying at grandad’s bungalow for a few days until it’s all over. 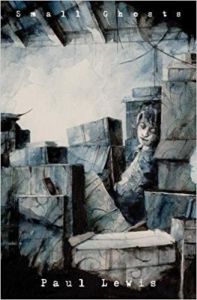 Spooky noises from the attic lead Tom up there to discover files about an old and particularly nasty child murder case that was never solved. Death looms everywhere. Tom is still grieving for his wife and supporting his mother as her father faces eternity. He has strange terrifying dreams. Even so, his old journalistic instincts lead him to investigate the murder case.

Author Paul Lewis is an experienced writer and keeps a tight focus on the protagonist and his inner turmoil. He describes everyday things cleverly with strong similes and draws the reader expertly into the story. Present day England comes to life: the amiable old blokes playing dominoes down the pub; the restless youths in hoodies lurking around the children’s playground after dark; the cosy bungalows of suburbia and the empty soulless concrete canyons of a tower block estate. The focus is on atmosphere rather than action but there’s a strong plot with revelations that resolve for Tom certain questions about his childhood. The ending was unexpected but quite fitting.

‘Small Ghosts’ is a satisfying quick read and a well-executed spooky story. Worth a look.