‘The Alchemy Press Book Of Horrors’ is a large collection of modern weird tales. There are so many I’ll just have to pick out a few highlights. If a story isn’t mentioned, it doesn’t mean I didn’t like it, just that the review should be shorter than the book. 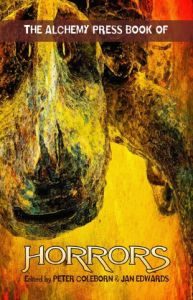 Like an army besieging a late medieval town, the editors brought out there biggest gun first: Ramsey Campbell. In ‘Some Kind Of A Laugh’, there’s a waiter in a small restaurant who bears a remarkable resemblance to a once-famous comedian and the restaurant owner wants him to use the comic’s catchphrases to entertain customers. Enough of them are old enough to get the joke. Then the comedian comes to do a show in town and the waiter goes to see him. Campbell is perhaps the most well-respected weird writer in England and I’ve enjoyed some of his work in the past but I must say this didn’t do a lot for me.

‘La Tenebreuse’ is the first story I’ve read by Storm Constantine and it was terrific. Some super-idle rich people stay in a large house in France and wait for the owner to show up. When he does, he’s as dashing as the female protagonist could hope. But there’s more to both of them than meets the eye. It was the style of this that I loved, the richness of language and imagery. There was some insight into character as well and not all of them were nice.

‘The Worm’ by Samantha Lee has a lady waking up to find a worm with teeth harassing her. Is it a figment of her imagination? Possibly, for she has been known to take mind-altering substances. As she battles the worm and remembers her rather beastly life experiences, we learn more about her. I enjoyed this and the manic stream of consciousness narrative style brought to mind some of Harlan Ellison’s work.

‘Masks’ by Peter Sutton is a sort of ‘Lord Of The Flies’ with adults. Shipwrecked on a barren island, where even fishing is impossible in the turbulent sea, the survivors, a mix of passengers and crew, must find a way to eat. The slow reveal of the situation is well done and the action rises efficiently. A story that strips away the thin veneer of civilisation.

Caitlin, aged fifteen, loses her virginity to a lout named Liam just before the start of ‘The Fairest Of Them All’ by Debbie Bennett. This one is split into days. On day one, she ponders the experience which gave her no pleasure except the self-esteem of being wanted. On day two, she tells her best friend, Hayley. A few days later, she starts vomiting and looking in the mirror sees a girl with swelling belly. From the Kull story ‘The Mirrors Of Tuzun Thune’ by Robert E. Howard to Stephen Donaldson’s ‘The Mirror Of Her Dreams’, looking glasses have played a big part in fantasy fiction. This is a thoroughly modern addition to the sub-genre and sufficiently weird and scary to suit fans.

There’s also a long tradition of deep-sea Science Fiction, continued here by Mike Chinn. ‘Her Favourite Place’ features Clarrie and Lois, her wife, stationed two hundred metres underwater on Sea Farm Three. It’s a tough gig psychologically, due to the isolation and most couples don’t last more than four months. Now Lois wants to go back and Clarrie doesn’t. Then she finds strange white flowers in amongst the kelp beds they are studying. The characters are well-drawn, as is their close relationship, and there are some surprises. I think I would have preferred this as a straight SF story with explanations but authors choose what they think best. It still worked.

‘Teufelsberg’ by Madhvi Ramani concerns Christian Finkel, a disgraced journalist sacked from the ‘New York Times’ for inventing facts. Fake news! Half-German, he mopes about in Berlin for a while then comes across a story by accident. Many people have disappeared in a small town called Teufelsberg which translates as ‘Devils Mountain.’ Hoping to restore his reputation with a big scoop, he goes there to investigate. The story is a clever fictionalisation of the real Teufelsberg and the first person narration makes the ending work beautifully.

A carload of people arrives at Marie’s, a garage and rest stop just clear of the Wilds where a few people have made a settlement. The Wilds is an area where worlds intersect and the flora is just as dangerous as the fauna. The worst things come out at night. Set in contemporary America, ‘Down Along The Backroads’ by Jenny Barber is almost worth reading just for the lilt of the prose but there’s a plot, too.

I really liked ‘The Trade Up’ by James Brogden. Charlie, a not very successful salesman, is cruising down the motorway at some ungodly hour of the night. It’s dark and raining. A car overtakes him that is a duplicate of his own, right down to the licence plate. He pulls level, looks across and sees his own face grinning back at him. The story develops nicely from this intriguing start and ends in a way I didn’t expect. I’ll keep an eye out for James Brogden stories in future.

There’s a magic song in ‘The Apple Tree’ by Marion Pitman, the devil’s work, perhaps. Julie is scraping a living as an editor. A man with ‘more money than skill was paying her to knock his novel into shape’. She’s become fascinated with a female ancestor from Dorset who collected old folk songs and even goes to her old house, now a charity shop, to hunt for the black box containing the rude ones she never dared publish. There’s a song called ‘The Apple Tree’ that should not be sung to a particular tune. The weird was okay here but the characters carried it off really.

Likewise for the seedy characters in ‘The Garage Men’ by Tony Richards. George Orwell lives again in the shape of Marcus, a posh Oxford boy renting a room in the Midlands town of Thaxtall to see how the other half live and write it up. Thaxtall will be his Wigan Pier. The kids sing a strange song about the garbage men coming to get you. The Americanism is odd for in the UK as we call them dustmen or refuse operatives in newspeak. The boogymen are pretty routine in this story but, again, it’s the real-life aspect that makes it work and the misfortunes of those reared on a sink estate with no ambition and no hope.

I loved ‘Get Worse Soon’ by Stephen Laws. Frugal Colin lives with his mum in a two-bedroom council house and is a devotee of pound shops, where every single item costs just ‘one sovereign pound’. His favourite is the Quidstore and he becomes so addicted he buys things he doesn’t need. One such purchase, from the stationery section, is a box of ‘Get Worse Soon’ cards, guaranteed to make the receiver die. A hilarious black comedy with a great ending.

According to Ezekiel 28:13, Lucifer was set with precious stones when he was created. A girl in a non-Christian culture is worshipped as a goddess when she starts to shed diamond tears. Then scientists investigate and decide she’s a fake, except one. When her skin starts to grow precious stones the mad Christians of the world decide she’s the incarnation of Lucifer and are out to kill her. ‘In the Rough’ by Suzanne Barbieri was remarkable for how long it kept going with new twists and turns. It worked despite the mad premise.

There’s a spate of creature features towards the end of the book featuring everyday objects coming to life and menacing the innocent. This is old hat really but still entertaining if done well. In ‘The Fullness Of Her Belly’ by Cate Gardner, it’s a collection of dolls accumulated by a woman who uses them to fake her yearned for pregnancy.

In ‘Broken Billy’ by Adrian Cole, it’s scarecrows. Once you made the giant leap of suspending your disbelief both of these were scary enough but my favourite was ‘Bluey’ by Ray Cluley. Mister Stevens, a teacher, makes a cardboard cut-out person, carefully ethnic and gender neutral in blue cardboard and asks the troublesome class to insult it, which they do, then asks them how they think Bluey feels. He’s trying to teach them a lesson about empathy and bullying but it doesn’t turn out well. The ending felt a bit tacked on but most of it was great.

‘The Alchemy Press Book Of Horrors’ is a large collection of weird tales best taken in small doses. I took some big bites but there’s such a thing as a surfeit of strange and it loses its impact. All the stories are set in the present reality and much suspension of disbelief is required sometimes to swallow the premises but the best thing about them all was the detail of real modern life and its problems. When Mister Stevens in ‘Bluey’ was marking schoolboy essays he found this: ‘The supernatural is merely a device to emphasise human qualities and frailties’. That pretty much sums up the book. 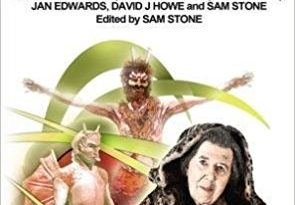 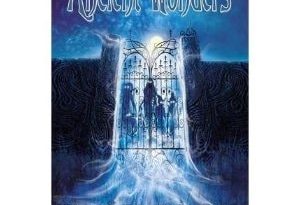