If you want a scary conspiracy TV series where anything said is likely to be spoiler, than look at the Kudos production ‘Utopia’ It is violent and not always predictable. I only found two elements I could have predicted and all for the right reasons.

To say anything at all is going to act as spoiler. Let’s just say that you should not let this interfere with a need for vaccinations and only be worried if someone insists everyone world-wide has them on the same day. You do need to find Jessica Hyde and be careful around Arby, especially when he has a gun in his hand. They all want to find Mr. Rabbit. Alliances change throughout the series which is why everything is so spoiler.

The bad language is excessive but so is the violence and some humour to balance things out. The best gag is where to hide a mobile phone used for its location tracker and the advice to choose a small one. No one is safe. Not even the population of the world is safe. This series will make you nervous if ever such an event is likely to take place. Even comicbook shops aren’t safe. ‘Utopia’ of the title is a comicbook with a concealed code and a few people are after the second issue and that’s when the trouble starts. 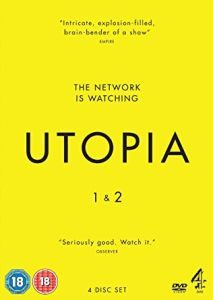 It is also the most compelling series I’ve seen and with an extra-ordinary addictive music track by Cristobal Tapia de Veer (who later went onto do the music for the ‘Humans’ TV series) amongst others to his credit.

I do have to wonder how I missed it the first time around on TV, more so as it’s a Kudos production and they do quality material.

There’s nearly an hour of assorted extras, including showing how a major stunt crash was pulled off. Only the deleted scenes with the second season and you have to wonder why a third season was never made. This doesn’t mean the second season doesn’t have a finale that works but it would have been nice to have seen it carried out. 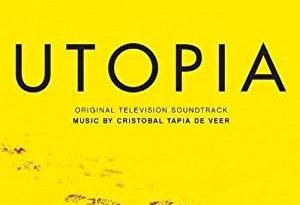