The examination of how various comicbook characters and teams have developed has now moved onto the first of DC’s teams, the Justice League. The Joseph J. Darowski edited book, ‘The Ages Of The Justice League’, has 17 articles on the subject spanning from the 1960s to the present.

For those who didn’t know, back in the 1930s-50s, National Periodicals (later to become DC Comics) decided to bring their main heroes into a team called the Justice Society Of America before their eventual decline in sales during the early 1950s cancelling the title. 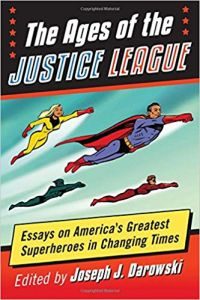 In the 1960s, with a new generation of super-heroes, mixing them into a team as a means to garner sales from the different fan bases went into operation using the same model. This time, the team was resurrected by editor Julius Schwartz with the name change to the Justice League Of America. The nation part has been dropped over the decades but the logic of bringing the main characters under one cover was to attract a collective fanbase.

It’s a good strategy providing the various editors agreed to let their characters be used. DC Comics editors were like fiefdoms and not all obliged. Although Superman and Batman belonged to this team, they were given absence slips as they were usually busy elsewhere. From my perspective, that probably served the JLA well. I mean, any team with Superman in it is going to be extremely top heavy.

I’m going to hit on different points from reading this book rather than centre on going through each section, which often depends on going over plots from different comics. Watch out for spoilers there although it might encourage you to track down the comics or reprints themselves. A book is always more interesting if you’re reacting than being a passive reader.

John Darowski (not the same person as the book’s editor) points out the JLA as being a family group which does feel a bit odd. Families are supposed to share secrets and in its early decades, outside of Batman and Superman, the rest didn’t even know their secret identities, although I doubt if it would be difficult to figure out. Although it was never said, even if they wanted to tell each other, the secrecy had to be maintained simply because civilian Snapper Carr had been given the freedom of their Earth-based cavern headquarters.

Hardly the nature of a ‘family’ group to have so many secrets, even something as basic as that one. Of the group, Green Lantern and Hawkman weren’t vigilantes but policemen, although not for any Earth agency. He does recognise that Wonder Woman was the token female, even as Black Canary was as her replacement when she was on a leave of absence. DC had very few super-heroines at that time anyway but, to my mind, the JLA came over principally as a man’s club than family.

Oddly, for a flagship title, the JLA never made it big in sales. Reading what is here in this book, I would also add that in those days, the DC Universe lacked cohesion. It was almost like criminal behaviour waited for them to get together for their monthly meetings to solve a crime. Also nothing could be done to interfere with any semblance of continuity in their own books. As Peter W. Lee says, the team also lacked personality as well and essentially people in costumes.

As Jason Stacks points out, when Steve Englehart came on-board for a year in 1977, it was with a mandate to improve the title in the same way as he did with Marvel’s ‘Avengers’. What Stacks fails to mention was that Englehart’s short tenure was because he was aiming to get out of comicbooks and into novel writing at the time. If anything went wrong, he had a way out already planned so he could take risks. It paid off. For a time, anyway.

Don’t think this book is all about the JLA, Ruth McClelland-Nugent focuses on Roy Thomas’ ‘All-Star Squadron’, a WW2 team set on Earth-2 but written in 1981-87, effectively brought to an end with the Crisis On Infinite Earths. You would think it would be allowed to continue as its events pre-date that event but DC Comics was determined to remove the alternative Earths saying it was confusing getting new readers, despite this book’s success. When you think of the current situation of 52 multiple-Earths, you do have to wonder.

Back to the JLA and it lost its ‘A’ for America when it had a complete reboot under Keith Giffin and J.M. DeMatteis with a team that included members who didn’t have their own books which allowed for greater blending without confusing continuity and also the ability to laugh at itself with a touch of attitude. Things changed for the better. Maybe. In the long term, despite the diversity of Justice Leagues around the world, when they were ousted with JL # 60, things went back to them being serious again. From my point of view, I agree with D.R. Hammontree, that a touch of brevity can lighten the load but a lot of writers can’t always pull it off.

The latter part of the book focuses on some of the mini-series within the timeline. I’m familiar with ‘Identity Crisis’ and noting the others for a look at some time. Cathy Leogrande’s analysis of the failure of the New 52 in 2011 failed because it aimed to be too radical. For my own analysis, you only have to compare to the 1960s where the new books were introduced gradually and then the team book. Rushing into these things has to be confusing to the reader.

You need somewhere to go with the individual titles. Starting with a team book seems backward in thinking. A key problem with the Big Two is far too much dependence on the editors dictating their universes and the writers just adding dialogue than ideas.

I wasn’t sure if I could learn anything new from this book and, as you can see from above, if I didn’t altogether agree then I would at least pause to think which is never a bad idea. It is rather interesting that several of the writers were quoting from the letters pages from the comicbooks and at least indicating that they weren’t relying on the collected volumes. As such, ‘The Ages Of The Justice League’ ended up being a rather enjoyable walk down memory lane. 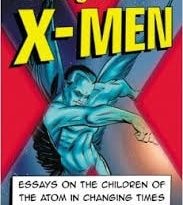 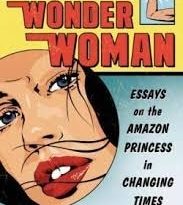 The Ages Of Superman (No. 1) edited by Joseph J. Darowski (book review).