This volume about the ‘Millennium Falcon isn’t the same as Haynes 2012 volume as there’s more emphasis on the Corellian freighters and their evolution in general with only a 20 page section devoted to its famous crew before the focus shifts to the spacecraft itself. There are lots of designs and photographs from all the films it appeared in right up to date. 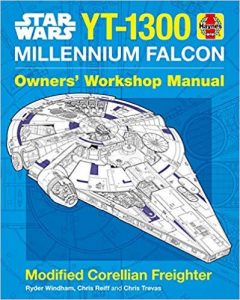 The modular form of the YT-1300 means it can be custom adjusted for cargo or carrying more passengers, although oddly the number of escape pods added can’t account for all the people so tell the droids there is an after-life before leaving them behind. Equally odd, later in the book, it’s pointed out that there isn’t a Wookie-sized escape pod and that Han Solo was prepared to die with Chewbacca and the Falcon if its likely to be destroyed.

If you take the scenario from ‘A New Hope’ where the Falcon is found abandoned by the Imperial forces, the crew manifest would wonder how Chewbacca got off. You would surely think it would make sense to include an extra-size escape pod. The use of the front pair of pinchers, for want of a better word as they aren’t identified in the book, is shown to be used for all kinds of things including carrying another spacecraft, more freight or to be towed when necessary.

I’m kind of worried about their refresher, a toilet in our galaxy far, far away, and have to wonder how it can accommodate wookies. Also, where did Princess Leia Organa slept on the flight as there is only one sleeping quarters and all are bunk beds. In fact, as I read this book, little matters like that kept coming up. Even the bunk beds aren’t designed for Chewbacca.

There is also some concern raised by having the cockpit on one side and not in the middle. Granted this does give the YT-1300 a blind spot but presumably instrumentation can sort that out. Some versions are shown where there is a more central cockpit although the giant pinchers have to be removed.

You should have enough information from this book to be able to pilot the Millennium Falcon. It’s rather interesting that it is computer controls rather than fly-by-wire with the controls. More so as you have two pilots using the same controls who have to act in synchronicity.

Something else occurred to me in that we don’t really see how long it takes to travel from place to place. Yes, there’s accommodation on-board but it does make me wonder how you can keep your emotions up during the flight and preparation for when you land. There is little detail on how Han Solo achieved the Kessel Run. Likewise, as I’ve dug deeper, there is little indication on this or any of the other vessels in the other books how reverse thrust can be achieved to slow it down although with the more circular shape of the Millennium Falcon, presumably it revolves around to drop velocity.

Undoubtedly, this book will sell to you if you are a ‘Star Wars’ fan and if you’re scratch-building interiors for your models, then this book will be a good guide. In fact, you can use this book to make it look like Lando Calrissian’s version as well and give it a smarter appearance than the grunge look Han Solo decided was less conspicuous. 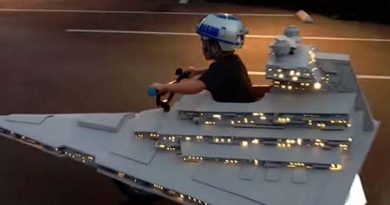 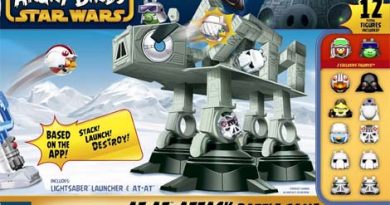 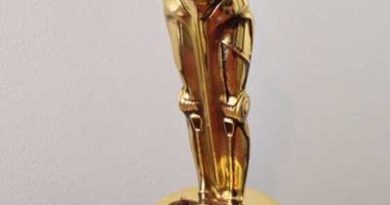 Forget the Oscars, I want to win a C3POscar!