Last year’s book, ‘The Collapsing Empire’ by John Scalzi, was a riotous, no-holds-barred imperial space opera that was a lot of fun and introduced us to the intriguing setting of the Interdependancy. The sequel is ‘The Consuming Fire’, which follows on with the same set of characters as they face up to the imminent collapse of the inter-dimensional flows that link the worlds of the Interdependancy together. The majority of those worlds are not self-sufficient but their occupants live in orbital habitats or planetary domes. Being cut off from each other would likely be a death sentence. 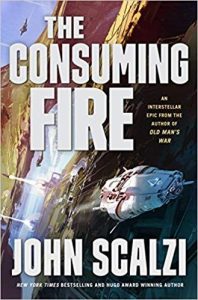 The Emperox Grayling II and her scientific advisor, Lord Marce, are still trying to convince the other dominant powers of the truth of the coming disaster, but the church, guilds, noble houses and politicians are too busy vying for power to take the threat seriously or they assume the collapse is itself some kind of power-grabbing ploy.

The book is full of colourful characters who plot together and betray each other without compunction, who arrange betrothals and murders with equal aplomb and who view everyone and everything else as expendable. John Scalzi eschews traditional manners and social interactions of the noble classes in favour of bluntness, coarse language and what is probably a more accurate portrayal of what they have really been like throughout history, rather than the polished public face of diplomacy that would normally be on show.

There’s a lot going on in this book and too much to encapsulate easily in a plot summary. The house of Nohamapetan, foiled in its attempts to marry into the Imperial House of Wu, continue its machinations to gain power, destroy the Emperox and regain control of its commercial interests. Non-imperial members of the House of Wu plot for and against each other, siding with whomever seems expedient and the Archbishop of the Church of the Interdependancy undergoes a crisis of loyalty as powers shift and sway from one day to the next.

The Emperox Grayling II, who never expected to ascend to the throne and is therefore somewhat unprepared and lacking in confidence, follows the traditional course of turning out to be not as gullible, weak and malleable as she might appear. She has a lot of help and advice to help her though, making her gradual transformation more believable than is often the case where those in similar situations suddenly discover an inner resolve and turn out to be great at everything. There’s a sharp sense of humour to the book, too, with witty dialogue and knowing smiles, making it a fun book to read that seemed to be over far too soon.