We’ve passed the plot summary for the second Trek reboot film, Star Trek Into Darkness, over to best-selling science fiction & fantasy author Stephen Hunt and asked him to take said information, crunch it through his asteroid-sized imagination, and use his own Sherlockian wit combined with authorly licence and deep knowledge of Trek to produce… how he would do it and make some educated guesses based on what we have just been told about the next J.J. Abrams flick.

Stephen’s answers kind of make sense given what we now know, and if correct, would prove to be some major spoilers.

“The ‘Into Darkness’ component of the title is very interesting. It carries echoes of Conrad’s Heart of Darkness, which is something we were promised without real delivery for the Star Trek: Insurrection film – arguably the weakest of all the Trek movies. From the plot summary, here’s my educated guess at the hidden details behind the synopsis. ‘Into Darkness’ refers to the trip to the dark evil counterpart of the Federation in the Mirror Universe, to get some payback for their interference with the ‘real’ Federation. The ‘war-zone world’ is the mirror universe Earth.

And why, you ask, is it such a war zone? Because in this mirror universe – already branched by the later destruction of Vulcan in ‘real’ Federation space, the Botany Bay never left carrying the genetically engineered warlords like Khan. Their DNA-ramped descendants still rule the Earth and control large swathes of space like feuding interstellar Mongol warlords (still, ironically, called the Federation… just a federation of human warlords and their client species allies). And the real trip into darkness here? It’s one of self-discovery. The ‘one man weapon of mass destruction’ – Benedict Cumberbatch’s character – is actually a twisted genetically enhanced superhuman… not a very old Khan, but his grandchild and heir, a very evil Kirk!”

So, what do you reckon to Stephen’s ideas about the synopsis? Time will tell just how right he is. 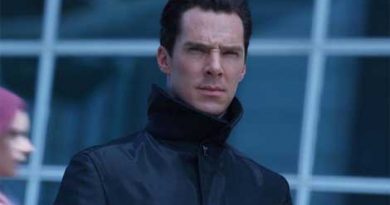 Star Trek Into Darkness – 2nd trailer (you know: for Cumberbitches).

6 thoughts on “Star Trek Into Darkness… some SERIOUS spoilers?”