Translated from the German by Jamie Lee Searle, ‘Qualityland’ is Marc-Uwe Kling’s satirical novel of a future where everything is controlled by algorithms. Set in a European country now known as Qualityland, it’s like living inside Google: adverts, deliveries, partners, jobs and every other aspect of each person’s life is assessed, rated, personalised and provided by all-knowing computer algorithms.

In parts reminiscent of Adam Roberts’ ‘Real-Town’ books and Cory Doctorow’s recent anthology ‘Radicalized’ with a flavouring of Douglas Adams, it’s a fun and wonderfully biting commentary on the future of a society that has all but given up at any pretence at self-governance. 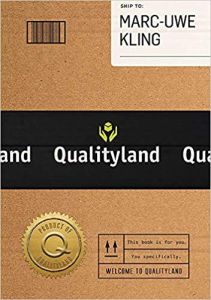 The main protagonist is Peter Jobless, so named after his father’s occupation at the time of his conception. You can already imagine the amusing surnames this might give rise to. At the lower end of society as rated by Qualityland’s systems, Peter attempts to negotiate his way through relationships, work and the dull routine of life while constantly being harangued by delivery droids, personalised adverts and smart technology of all kinds.

Meanwhile, in the background, a new presidential campaign is brewing, pitting various hopeless candidates against each other to vie for a job that is increasingly pointless. The candidates and their aides give us a second view of Qualityland, an overview of how the policies come about that are gradually dehumanising the population and rendering them impotent in the face of progress.

Marc-Uwe Kling’s vision of the future is gloriously funny in places, surprisingly close to real life in others. Numerous in-jokes are repeated throughout the book, gaining more and more pathos with each mention as the life of Peter Jobless is tied up in tighter and tighter knots by the algorithms and systems that are forcing him into a predetermined pigeonhole. Even the rich and powerful, who are behind the mega-corporations that rule the masses, begin to find their lives increasingly controlled.

Sprinkled between the chapters are news reports, guides to Qualityland, adverts and other ‘non-fiction’ snippets that round out our view of the country. The endless stream of new and improved products that are made to sound somehow useful but that in fact simply play into the hands of data-hording corporations are merely extrapolations of what is already happening.

They’re made all the more real by the ridiculous situations Peter Jobless finds himself in and bizarre solutions that have been hit upon to solve the problems of an over-consuming, overly-controlled society by introducing new ideas and products that are adding to the vicious cycle. There seems to be no aspect of modern society that Marc-Uwe Kling does not target as he takes us on this riotous tour of the not-too-distant future.

He also does not hold back from delving into the very personal lives of his characters and sharing with us the information and videos that they probably wish had remained unseen. With politicians, hackers, billionaire businessmen and media personalities all playing their parts, Qualityland is a country on a runaway course, while ‘Qualityland’ the book is steered skilfully through the bizarre maze of Peter Jobless’ manic life to provide us with a fabulous product that is nicely gift-wrapped and hand-delivered. Apparently, soon also to be available on your television sets.