‘Project Hail Mary’ is the third standalone Science Fiction novel by Andy Weir and the second one I’ve personally read.

Ryland Grace wakes up on board a spaceship alongside his dead crewmates on a mission he has no memory of. Slowly but surely, the enormity of his mission dawns on him and he realises he’s the only thing between Earth and complete destruction. Ryland now has to figure out how to save Earth in a very limited amount of time all on his own. 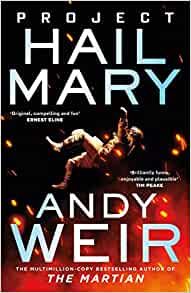 First things first, I did not get on with ‘The Martian’, Weir’s first book. Hence I skipped the second book, but I was convinced by a reading pal to read this book. I’m so glad I was convinced as I really enjoyed it. The characters in this book were so much more lovable than in ‘The Martian’, even though the plot was fairly similar with them both being peril in space. I found Ryland, the protagonist here, really funny and non-sweary character who bounced perfectly off characters we learn about as we get further into the book. I found myself laughing at the main characters in this book far too much for a book about the possible destruction of the Earth, oh and it made me cry at times, too. That’s how I know this author has written some awesome characters.

I know a lot of people don’t really like hopping backwards and forwards in time as a plot device but I think it worked really well in this book. We learnt along with Ryland why he was out in space, why he was on his own, what the actual reason for the mission was and how to use all the equipment. Plus skipping back in time, we got to meet some fabulous characters like Stratt, who I personally loved. I vote for Stratt for president at some point, she really does know how to get things done. Although she is quite morally grey, so maybe she needs someone like Ryland as her vice-president.

As with the previous Weir book, I’ve read this one also has lots of what appears to be accurate science and maths. I’m not a scientist or mathematician but it certainly looks realistic. This isn’t to say that the book is dull at all, there was just enough science to make things feel realistic but not enough that I skipped chunks of the text. Everything was explained clearly and seemed to be meant to make sense and not boggle the reader.

I found this to be a little different to traditional Science Fiction novels where there’s inevitably a bad alien race that humans have to destroy in massive space based dog fights. This felt a lot more positive in terms of humans working together to save the planet using science in a positive way.

Given how much I enjoyed this book, I’m willing to give Weir another go with his next book. I’ll update you! 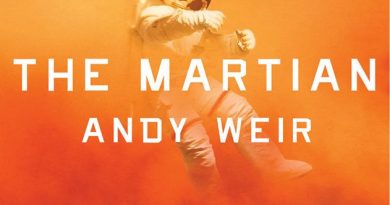 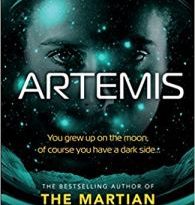