‘The Ravenous Dark’ is a standalone fantasy book by A.M. Strickland.

Rovan watched her father die to protect her and her mother from the fate of those with magic when she was a small child. Unfortunately, she exposes her magical ability trying to save her lover meaning her father’s death was for nothing. Rovan now enters a world full of intrigue she doesn’t understand and people she can’t trust where she is constantly guarded by an undead spirit. Rovan along with her new friends and undead guardian slowly unravels the terrifying secrets of her new world. 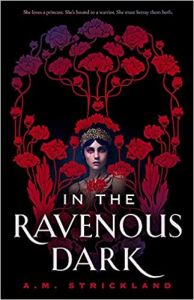 As this is a standalone book, there isn’t as much space to create an intricate world as in a large series of books. That’s not to say that this world isn’t carefully created and absorbing. I loved learning about things like the Blight, the Veil and the magic system. It was all really interesting and enthralling, but I kind of wanted there to be at least one more book just to give us more of this world. At times, I felt like things were a little rushed, we could have done with a little more world and characters even if that meant this being a duology. The world appeared to be based on a ancient Greek/Roman world with lots of hints to this in the buildings and clothing . This makes things super easy to visualise and understand which was great given we only had a few pages to learn things.

The one thing you will notice reading this book is the amount off queer representation, it’s a joyous ode to all things LGBTQIA (Lesbian, Gay, Bisexual, Transgender, Queer or Questioning, Intersex, Asexual or Ally). It really does include people from almost all those categories, for example the main character is a pansexual, polyamorous individual, plus there are non-binary and asexual side characters, too. The world where these characters live is just enormously accepting of all genders and sexualities, except in one situation. If you’re expected to create heirs you must do so in order to pass on the various different bloodlines, other than that anything goes.

This book really did have a wonderful cast of characters, I think I loved each and every one of them at some point. The found family elements were just so cosy, I do love a found family book. My absolute favourite character was Japha, they were just so entertaining and clearly drawn. I could easily visualise them in their fabulous outfits, they were the perfect friend for Rovan.

I really did enjoy this book and will definitely be reading more from this author in the future. I wouldn’t be mad if some of the characters in this book popped up in another book or two.