‘Pretty Young Things’ by Dominic McDonagh is, according to the blurb, a horror novella about a nest of lesbian rave–bunny vampires, an advertising line that may attract a certain sort of reader. They would be disappointed because there isn’t any sex here. Oh, there are plenty of descriptions of ‘Pretty Young Things’ in fetish clothing but the book is more dedicated to violence. 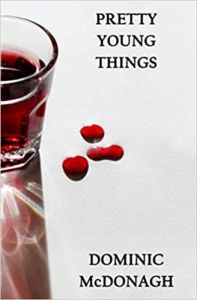 Chelsea is a vampire in a nest of nine living in a large house in Manchester. It’s owned by Coral, their leader, who is a few centuries old and has accumulated some money. She is by far the strongest and most dangerous of them. The ladies frequent night clubs, lure innocent young men back to the house then hang them upside down in the cellar and slowly bleed them to death. Chelsea comes home from a bad night out where some chavs tried to rape her and finds her ex-boyfriend, Jared, hanging about in the cellar. Although converted about five years earlier, she still has a soft spot for him. She manages to get him out of the house, fighting her way past a few of the other ladies. They are not pleased and Chelsea knows they will come after her. They do.

‘Pretty Young Things’ is a competently written bit of hokum but suffers from too frequent point of view switches and a lack of even one likeable character. Chelsea is nice enough to save Jared but went along quite happily with killing others, as a vampire must, I suppose. Jared isn’t evil but his friends are dodgy characters who can supply guns and drugs. His best friend is struck off doctor, Leonard, who could give Joseph Mengele a run for his money when it comes to cold-blooded sadism. Humans battling a nest of vampires would work better if the reader cared a damn about any of the humans. I didn’t.

While I have no objection on principle to point of view changes where it’s necessary to tell the story there are too many here. At the start, it seems to be Chelsea’s story, then Jay’s, then a couple of the vampire ladies. Much of the latter half of the book is devoted to Leonard’s unsavoury experiments. On the plus side, the author demonstrates some knowledge of biology and medical procedures but tied-up ladies being tortured isn’t my cup of tea in fiction or life.

It’s okay. This sort of thing veers towards being over the top and the slasher/gore fans will probably find it tame. For myself, I like horror where the supernatural creatures are evil but prefer to think of humans as being a bit better.