Fred Miller is a paunchy professor of phytoplankton pathology at the University of Florida and his wife left him three months ago for a younger man. Graduate student Helena is an attractive blue-eyed blonde. His cunning plan to take her on a research trip to a spoil island in the Santa Rosa Sound goes awry when she brings her boyfriend along, a handsome hunk called Scotty. It goes even more awry after they land when a strange tobacco-coloured mist rolls in, accompanied by a tide of black microbes, killing everything in its path. 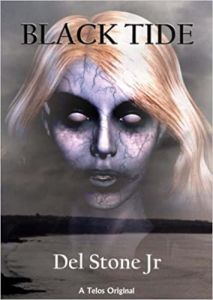 They save themselves with a frisbee and the gas masks they brought along for the trip. However, when the mist has passed, they see masses of people on the mainland who seem to be on fire. These unfortunates are hurling themselves into the water but they do not die. They live and crave human flesh.

Like any good horror, the book ‘Black Tide’ succeeds because of the characters affected by the disaster. The depressed professor craving an attractive young lady is not a hero for our time. He’s a bit sad and he knows it and probably wouldn’t have done anything to risk his job and his future even if the boyfriend hadn’t been there but it was a nice fantasy. I liked him. Scotty is a typical young hunk, contemptuous of the older man and not especially smart but not a bad guy really. Helen is a bit of a cypher for most of the story but reveals some depth near the end.

Author Del Stone carefully racks up the tension as the trio survives a number of deadly attacks. There’s plenty of scientific detail about the marine environment and the instruments used to study it. How the microbes made zombies isn’t really established given the limited means available to Miller but who cares? Like warp drive, this sort of thing is a given. The crisis brings out the character of the cast and that contributes a lot to the entertainment value. They’re not just cardboard cut-outs you couldn’t care a fig about. It’s well-written, too. I enjoyed ‘Black Tide’ very much.

Having sung its praises, I regret to say that ‘Black Tide’ is not easily available, alas, in paperback. I found one copy for a mad price. However, you can get a digital download from the world’s biggest bookseller, although that appears to have stopped. I’m not sure how a digital download differs from an eBook except that it’s more expensive but in this case, possibly worth it. Great story.