When a writer changes genres, the after-effects can be either good or bad. There is a distinct danger that the readership built up will not be enamoured with the change in direction. Conversely, the new readers may discover areas of literature they hadn’t thought of trying before. It gives publishers a headache as well as the author. When David Gemmell wanted to write a straight historical novel, he was told he’d have to be treated as a debut author and paid accordingly. He put the fantasy back. 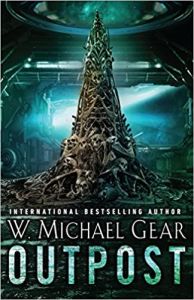 Michael Gear has made a reputation for writing historical novels set among the Native American tribes before the Europeans had even discovered America. Now he has turned his hand to Science Fiction. There is no doubt about the quality of his writing and his ability to pen convincing action scenes. He has some interesting concepts in ‘Outpost’ and the fact that this is the first book in now five books needs to be taken into consideration but like many authors embarking on a new project he has thrown everything into this first volume. There are actually at least four novels within this book here vying for importance and none of them quite coming out on top.

Donovan is a colony planet named after the first man to die there and whose sun is Capella. We know that many stars have exo-planets but, just because Capella is reasonably close to the Solar System, it is not the best choice as it a quadruple system, two binary pairs, a factor not taken into account. Placed elsewhere, this would have been a fascinating planet as Gear has taken time to create a very alien ecosystem, one which is full of danger for the colonists. Most people live in Port Authority behind high fences and have learned not to be outside the perimeter during darkness. This is one novel, the struggle for existence by the Donovans, exploring the ecology and making survival work.

The reason for the colony on such an inhospitable world is because it is owned by the Corporation. The purpose for being there is mining and all the colonists came under contract with the Corporation. This is a planet very rich in heavy metals. While there may well be planets whose construction is weird and unknown, the geologist in me is unconvinced. The explanation given is that a huge asteroid colliding with the planet and scooping out a crater that is now a bay, started a chain reaction of volcanic activity which brought all these minerals to the surface.

It also caused the formation of a vast number of valuable gemstones. It’s the heavy metal predominance that makes the plants toxic. They cannot be eaten by the colonists but Earth type plants can flourish. Setting aside the issues of geology, the Corporation is cast in the role of ‘bad guy’. The hints are that the Corporation virtually runs Earth and the translunar colonies. It is the government and as long as you behave and have a contract, no problems. Stepping out of line is tantamount to suicide.

The Corporation hasn’t heard from the colony for a while and suspects a takeover. When Kalico Aguilla is sent out to pull the colony back into line, she is doing it from the aspect of ambition. This is her opportunity to earn herself a seat on the Board and eventually rise to Chairman. She is portrayed as a hard-headed, no-nonsense company woman. She does not know what she is heading into but has the arrogance to know that she will sort it.

Aboard the Turalon with her are a detachment of enforces led by Captain Max Taggart and a large number of new colonists to replace those whose contract has expired. For Taggart, this is a punishment detail as he previously questioned a superiors orders. The second novel here is the set up back in the Solar System and the grip the Corporation has on everything. There are hints but not enough to really grasp the big picture of this society. Therein lies another novel.

Donavan has reason to feel that it has been abandoned as there hasn’t been a ship arriving from Earth for six years. Then Turalon arrives with four hundred new colonists, people who are expecting to take over jobs from those whose contracts are up. They are expecting at a minimum, a civilised situation with amenities. They are totally unaware and unprepared for the hardships of the real planet. For Talina Perez, who is head of Donovan security, this is going to be a major problem. Among these people who have been travelling in cramped conditions is a man who is currently going by the name of Dan Wirth. He is actually a wanted murderer but has killed the real Dan Wirth and stolen his papers.

He is a smooth-tongued chancer and when he arrives, he sees an opportunity, setting up crooked card games, then a casino. When gamblers can’t pay their debts he amasses their property. He has ambition to become the most important person on the colony. The third potential novel here is what happens to the disembarking contracted colonists. The focus is on Aguilla, who expects to be in charge, Taggart who is expecting a minor police-keeping role, and Wirth who is out for himself. There is very little about the rest of the arrivees.

The fourth plot strand is a mystery. Turalon is the first ship to arrive for six years, but it is not the first to head for the planet and the last one that left never arrived back in the Solar System. The means of transversing the distances between stars is called inversion. Now it seems that there is a problem with ships disappearing. To add to the mystery, the ship Freelander arrives. It set out months before Turalon and not only has it only just made planetary orbit, but logs show it has been travelling a hundred and twenty-nine years. All the crew are dead from old age.

Some of these elements will, most likely, be expanded upon in later novels but it is almost as if Gear is not sure which story he wants to tell first. There will be many who will enjoy this as a pacey novel of colonisation, especially as on current showing, it is heading out to be a frontier settler novel taking influences from early American history. As for readership, he will need to rely on the cohorts that seek out space/opera/lost colony novels rather than the followers of his historical novels. 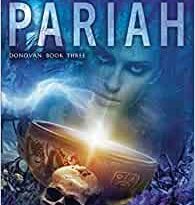