‘Matryoshka’ is an odd one to say the least. It’s an adult variation on a classic children’s story trope in that the protagonist, Cherenkov, lost in Venice in the aftermath of the second world war, meets a beautiful redhead, Septima. After a passionate encounter, she leads him through a door at the back of a quirky little shop, which in turn leads to a magical alternate world. This world, Eboreus, turns out to be just as surreal as Oz, Wonderland or Narnia.

Cherenkov is eventually sent on a quest, with Septima, to bring back a member of the royal family, who failed to return from a journey some time back. 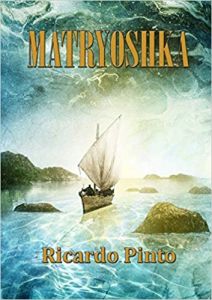 What he isn’t told, at first, is that the passage of time here is very out of sync with that on Earth and, if he insists on going home, he will find everything has changed dramatically. This is similar to the common fantasy trope that any human who travels to Faerie, will find that considerably more time will have passed on Earth on their return. To describe the events further would be too spoilerish, so I won’t.

It’s a fascinating tale that did eventually grip me. However, it took several chapters for me to connect with the story. This is down to the entire book having been written in third person, present tense, which frankly, I found downright annoying to read at first. I confess that, had I not agreed to review this book, I may well have discarded it unfinished fairly early on. It was a short read, however, so I persevered and, as I got more involved in the story, the writing style became less and less noticeable.

Ricardo Pinto obviously put a lot of thought into the impact the time differential might have on Cherenkov’s return to his own world, albeit I did feel that he figured out some of the modern technology rather more quickly than would seem likely.

All in all, I’m glad I persevered and I may well read it again at some point, as I’m sure there were things I didn’t quite get on the first read. I’m not sure that this particular adventure would benefit much from a sequel, but I can’t deny that I would be intrigued to read more about the mysterious world of Eboreus.