The second volume of Ian McDonald’s ‘Luna’ trilogy follows on directly from the events of ‘New Moon’, chronicling the fallout from the tumultuous events of its conclusion and following the various family members from the Moon’s five major families. It seems to be a more thoughtful and considered book, less hectic than the first volume while maintaining the same intrigue and frisson of danger. 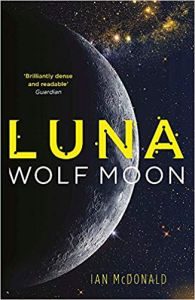 Ian McDonald’s lunar society continues to astound and amaze, showcasing his ability to juggle multiple personal storylines to build up a picture of the background social setting. There’s still only a small amount of technical detail with brief descriptions of the construction of the various habitats, mention of emergency systems and the everyday functions necessary to life but enough to provide an air of realism and embed you in the story without distraction.

The Corta family who were the focus of ‘New Moon’ continue to play a central role in this volume, each attempting to recover from the devastating consequences of that first book’s finale. Other characters from the rival Dragons’ families continue their political wranglings, plotting and planning. The Mackenzies, who had long resented the Cortas’ control of the helium business.

The Asamoahs who are friendly with the Cortas and had provided sanctuary for Lucashino when he fled his arranged marriage. The Vorontsovs with their orbital empire and the Suns with their enigmatic and long-term plotting. It’s a wonderfully complex situation where alliances shift, dynastic marriages bring temporary truces and the five families constantly manoeuvre for power and advantage.

There are some great sequences that Ian McDonald has written, episodes of working on the Moon’s surface and travelling across the dusty terrain, that really portray the stark grandeur of life on this inimical world. The Moon has a thousand ways to kill you is the warning that inhabitants of the Moon know well. That is well attested to in this second book, where a mistake can kill you, overlooking a safety check can kill you and a slip can kill you.

Despite this precarious existence, there seems to be very little respect for life and so bodyguards, mercenaries and family retainers seem to be always ready to knife somebody, fling them from a high building or push them out an airlock. It’s a brutal existence where, even when nothing violent is happening, the low gravity gradually saps the body’s strength and destroys bone structure. New arrivals on the Moon have only two years to return to Earth before the damage to their body makes a return too dangerous and it is commonly accepted that the Moon-born can never travel to Earth. Everything is challenged by the Cortas though as they struggle to survive and to reclaim what is their own.

It’s a highly enjoyable continuation of the saga, expanding on the world Ian McDonald has created and imbuing it with yet more depth and detail. The plot moves forward relentlessly, never seeming to allow any rest for the cast of characters and never allowing the immature society of the Moon to ossify. Events progress in orderly chaos in which a mostly-unregulated world continues to operate. It’s a complex plot that keeps you intrigues throughout and leaves plenty to be resolved in the third volume, ‘Luna: Moon Rising’. 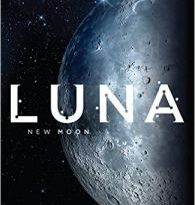 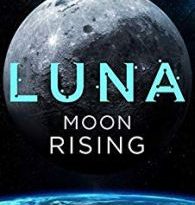 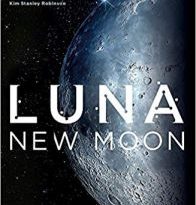