I haven’t seen ‘Jim Henson’s The Storyteller’ for quite some time but there is always a strong memory for the 1987-89 13 episodes that made up its two seasons. Even without that, the test of any CD soundtrack is whether the music can stand on its own. Soon as you hear Rachel Portman’s rich music, it’s obviously strong enough to stand alone. Each story has two suites, each roughly 4-6 minutes long. Portman had a 28 piece orchestra which, back in the 1990s was extraordinary to have for a TV show. 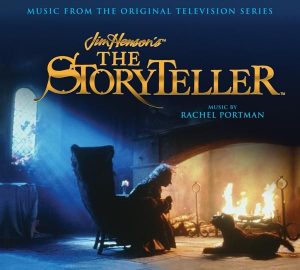 I found the music very haunting and with main titles, distinctly playful. There are three seasons here, covering the two John Hurt narrated seasons and the last with Michael Gambon. The most eerie has to be track 8 of disk 3: ‘Orpheus & Eurydice (Suite A)’. The music catches everything and you also have the main titles and the American version of the third season.

The 32 page booklet is mostly a history of the series written by Tim Greiving and interviews from producer Duncan Kenworthy, Lisa Henson, Brian Henson, Dominic Minghella (as his brother and writer Anthony died in 2008), director Steve Barron and associate producer Martin G. Baker. The idea for the series came from Lisa Henson and her dad, Jim Henson, saw it as a challenge to do on TV after doing two films and proceeded to get it organised.

You can read it all here. Composer Rachel Portman tells about the music and what she did for each episode. Oddly, it was only the lack of sales and back positioning in the USA on ‘The Henson Hour’ that got the series cancelled. There are also a stack of photos making the booklet a true reference.

If you’re going to buy then you need to go to the link below. As a limited edition, I doubt if it will sell first hand elsewhere. Don’t get caught out if you want to add a copy to four collection.