Tom Birkett is recounting the obviously named ‘The Norse Myths’ in this book. As it’s a subject I’m familiar with, the first thing I checked was his bibliography and how far back he went in his ‘Further Reading’ which was only as far as 1980. My own references go back to ‘Myths Of The Norsemen’ by H.A. Guerber in 1909. I thought it might have been harder book to find but discovered it’s been regularly in print since. 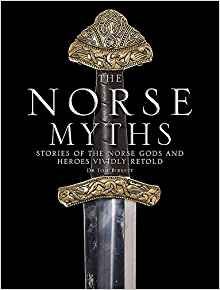 I wish Birkett had included comments than just relating the stories, so you’ll have my reaction instead. Something in common with the Christianity mythology is a lot of time is spent showing how Man was created but not where Adam and Eve’s children got their own wives from. With the Norse, this goes back to the first god, Buri, created by the cow Audhumia who licks him out of a column of salt.

The first man and woman in Norse, by the way, were created from the driftwood of ash and vine that looked humanoid by Odin. You do have to wonder how the Norse narrators got around explaining why Odin didn’t turn all driftwood into humans against the normal process of sex. Oddly, Odin’s two brothers fade from the storylines with no reference what happened to them.

It’s rather interesting reading how Odin and some of the other Aesir travelled amongst the humans and did make me wonder if some of the storytellers used this as a means to get free lodgings and food in their own travels. The one-eyed prophet aka Odin pops up a lot over the various Norse warriors in later parts of the book, so we either have a genuine long-lifer out there or the masquerade has been going on with different generations.

Seeing the lineage, Odin might be the all-father but not all of Aesir were his children as compared to the Roman/Greek gods. Loki was certainly a bad god and Thor certainly had a temper about him.

The stories of the Aesir and the giants are pretty much as I remember reading them. This time around, I had a lot more time to think about them. Many of the Aesir married giantesses and you really do have to wonder if they were smaller or the Norse gods could change their own height. Certainly, the giants were a lot smarter when they outwitted the likes of Thor and Loki.

Something that comes from re-reading all these stories again is that these are no morality tales. If there is a common theme it is explaining weather phenomenon and geographical features. The Aesir themselves are extremely violent a lot of the time and self-serving. Considering these stories fulfilled the Norse desire for conquest, that shouldn’t be surprising and their mythology expresses that although there are some levels, as with Loki and betrayal, that they shouldn’t go that far.

Several chapters are devoted to Norse leaders and their descendants who claim lineage from Odin or the Valkeries while on Earth and their diplomacy, which often turns violent later, suggesting more is going on behind the scenes than what becomes legend. Quite what others must have learnt from these tales back then could give some debate but certainly not too trusting anyone for too long.

These tales certainly centre on aggressiveness and the heroes themselves are certainly treacherous. I did think as I read that with continuous retelling that there must have been some exaggeration and distortion of facts over the years. However, similar to our current reality, there probably weren’t many people like me around analysing and thinking about the real truth of anything given.

It’s interesting that the Norse also carried on the myth of dragons and werewolves which does make me wonder where they sourced that from or what they had to base them on. Oddly, it’s only when we get to Leif Erikson that we get the first inkling of Christianity and it being preached. Oddly, Christianity didn’t change their battling ways.

The Norse certainly travelled the world conquering and a lot further into Europe. We know of their ways in Britain and even against King Alfred, who sought a peace by trading hostages with Guthrum who promptly killed them before going onto seize Exeter. Oh, Norway wasn’t actually a country name originally but a route from Scandinavia to Europe.

In the final chapters, Birkett looks at how the Norse legends are treated today. Oddly, this is only where he mentions ‘The Ring Cycle’ here than give any depth on it. Certainly, Nazi Germany had a thing for Norse mythology and there is a lot of it in J.R.R. Tolkien’s ‘Lord Of The Rings’. There’s even a reference to the Marvel reworking in comicbooks and films so I doubt if Norse mythology will go away any time soon, although the violent nature is toned down. In many respects, I wish he’d explored the influences more but maybe he could do another book on that.

I should also point out that there are a lot of photos and paintings included as well as various artefacts. Many of the paintings are from the 19th century and I do have to wonder about how close they should be treated to reality. Certainly it does demonstrate the mythology got into their subject matter.

Despite some criticisms, there is a lot to be learnt here. Don’t expect the latter depictions here, especially with the conquering Vikings although I wish Birkitt had compared this to history as to how much was accurate it really was.